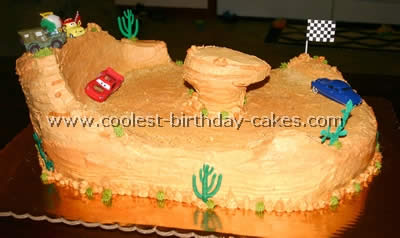 I just started making cakes for my family this year. This Cars birthday cake is actually my fourth cake. My nephew, who just turned six, wanted a Disney Cars Cake so I told him I would do it. It was a fun adventure.

First I watched the movie to get inspiration then decided that the Willy’s Butte racing between McQueen and Doc would be perfect. This cake was constructed by using a 16×3 inch round pan and one of those cheap brisket pans you can buy at any dollar store.

Once the Cars birthday cake had been decorated I added Graham cracker crumbs all over the track to give it that dirt feel. Buttercream icing works great as glue on this cake, I didn’t have to use any baking rods to hold anything up, just well balanced. It even survived an eight mile trip on the road to the party.

This took about two days to bake and decorate; it was a fun experience and my nephew loved his cake. Of course that’s why we make these works of art to see the look on our loved one’s faces. It was worth it all.

Cake by Martha B., Midland, TX 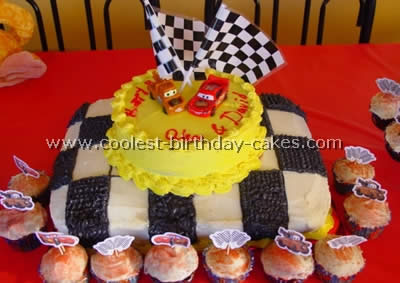 I made this Cars birthday cake for my boys’ joint birthday party. They love cars and they loved the movie. It is a chocolate sheet cake covered with buttercream frosting. I used a ruler to make the squares. The round cake is white cake covered with buttercream frosting as well. I added the plastic cars and flags for the final touch. It was a real easy cake to make and got many compliments! 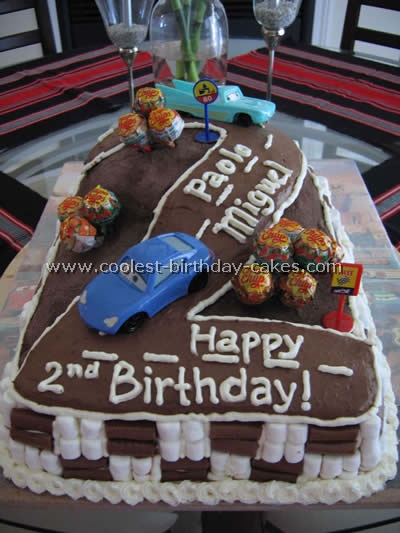 I made this Cars birthday cake for my cousin’s 2nd Birthday. He’s really into Cars. Luckily, McDonald’s toy for their happy meals is from the Disney movie “Cars”. I used the cars from there and also a small poster from the movie to use as my cake board backdrop.

I made the cake look like a mountain with dirt-road look. I made the road follow the shape of the number two for my cousin’s “2nd” birthday. I put two cars along the road and added a few add-ons like the road signs I got from the dollar store.

The side of the cake was covered with tootsie roll and marshmallow placed into a checkered-like design. As soon as he saw the cake, he couldn’t keep his hands off it. 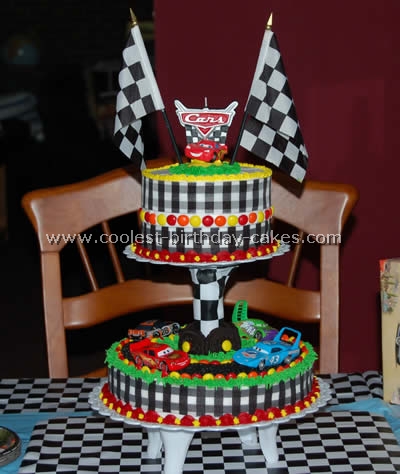 This Cars birthday cake was made for my son’s 3rd birthday party. The theme was CARS from the Disney movie. I made a one layer 10-inch round cake for the bottom and the top cake is a 2-layer 6-inch round cake.

After the cakes cooled I iced them both in white buttercream icing.

To get the checkered flag look around the cakes I bought ribbon at our local craft store and wrapped the ribbon around the cakes. I then secured each ribbon with a pin. The racetrack is made from black sugar sprinkles. I am not a fan of black icing so I thought this would look better and adds a little sparkle to the cake.

I bought checkered flags at a party supply store to place on the top layer and also added four of my son’s Disney Cars cake decorations from his collection.

This cake could also work well for a Nascar themed party. It’s not too difficult but very time consuming. 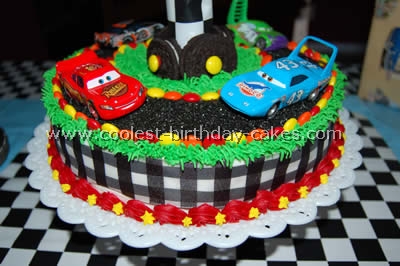 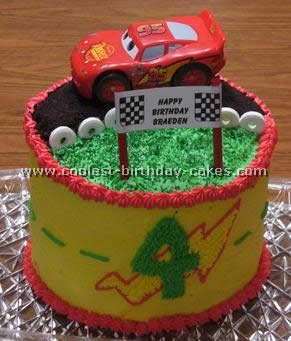 For Braeden’s 4th birthday I tackled a Cars birthday cake. We started with four 9-inch cake layers. I cut the top layer at an angle to make a track around the back which angled up and curved. I then used the left over chunk to prop the track up even more. All gaps were then filled with icing.

I used crushed Oreos for the road, white lifesavers for tires and printed out the banner on the computer. We used straws to hold the banner and to prop Lightening McQueen up as he zoomed by. Our infield was just green icing teased up with a fork and sprinkled with green sugar sprinkles. Iced the front with a lightening bolt and the number 4 and we were ready for raceday! 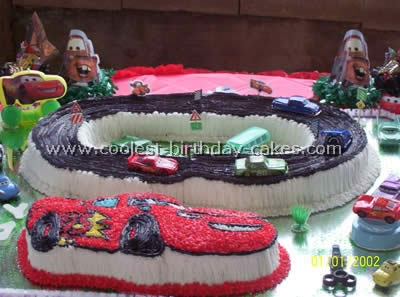 The idea came from the movie Cars. My son (3rd birthday) is crazy about this movie so I made him a cars birthday cake. I made a simple white cake mix and a lot of colors (same as the movie). I decorated everything in those colors and it was a great party. 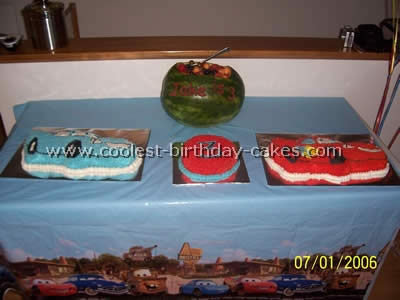 I used the Lightning McQueen Wilton cake pan and iced it to look like McQueen. Then for Sally, I used the same pan, only I followed a picture of Sally to get the detailing and color scheme just right.

Their bodies are basically the same shape, so it wasn’t hard to make. It looks like two different character cakes. 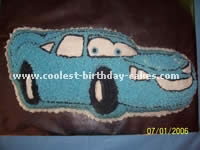 Then I made a small cars birthday cake out of the Wilton small round cake pan for him to have all to himself. I used the leftover icing colors to frost that cake so it matched the other two. They turned out great and he loved them all! 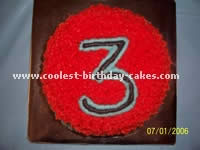 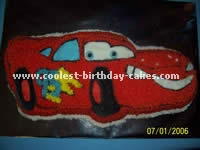