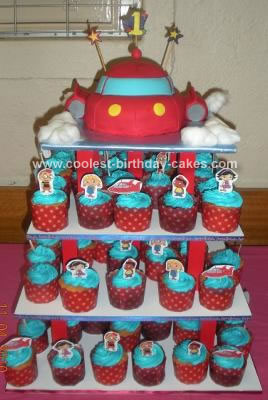 This homemade Little Einstein Rocket cake was made using a chocolate mud cake. A 10″ round pan was used to make the base of the rocket, which I then just shaped using a serrated knife. A round Pyrex dish was used for the top. I then covered the entire cake with red fondant. Blue and yellow fondant were used for the windows and headlights and a little round ball of fondant on a toothpick was used for the aerial. The engines were made entirely from left over fondant, with a cracker stuck in them, which I then covered in red fondant.

The cupcakes were chocolate mud cake or vanilla and were covered in butter-cream. The cupcake toppers were made by printing out images of each character, covering them in adhesive plastic and cutting out each one. I then attached a toothpick to each and stuck it in the cupcake.

This homemade Little Einstein rocket cake was for my son’s 1st birthday.