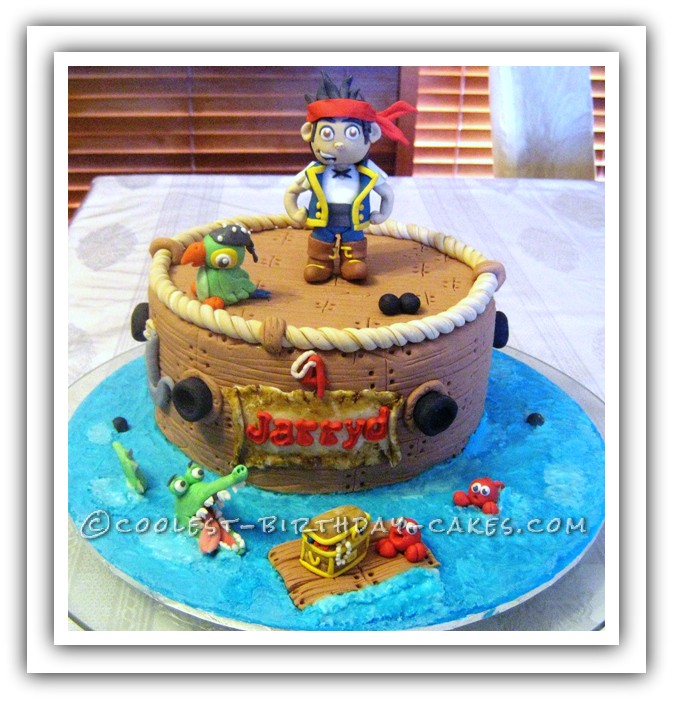 I was asked to make a Pirate cake for my sons best friends nephew. It had to be an eggless cake, which I had never made before, as the little boy had an allergy to egg. I had a lot on my plate so decided to do it the evening before the party. I had already completed the models, after all it was just a cake and I had a box of No Egg to help… Hmmm.

It was eggruciatingly annoying baking. After baking the cake for an hour and a half, and then waiting for it to cool, I started to trim and it was way to crumbly on the outside and soggy in the very middle……OH NO!!! I had to start all over again at this stage it had turned from the day before to the morning of….. I decided that the No Egg was an absolute no go and used yummy ripe bananas to be the combining agent instead. Luckily it rose quite well and was perfect when I trimmed the crust and top.

Sleep decoration (a type of self induced sleep deprivation)… Phew, just got to fill, crumbcoat and cover. Looking over at the clock and it was after 2am, I actually thought about just calling it quits and going to bed but I took a deep breath and just soldiered on!!!

As I started to see it come together I became a lot more relaxed and the stress started to melt. Thank goodness for that.

It was now 3:30am and I still had the board to do, which I really wanted to do something a bit different with because the “ship” was a basic round shape, I needed something to help make it pop a bit so out came the royal icing and I can tell you now, what I thought would be a pretty quick way to get the effect I wanted, really wasn’t at all!!!

Nearly 5am and I am done, really, I have nothing left to give… I step back and admire my “put together in a couple of hours” cake. Not too bad I can now relax but unfortunately sleep will have to wait till later but coffee will be my friend and help me to make it through…..lol

The reaction on the face of my son’s friend and his Mother, when they arrive to pick it up for the party, made it so worth while.. :D