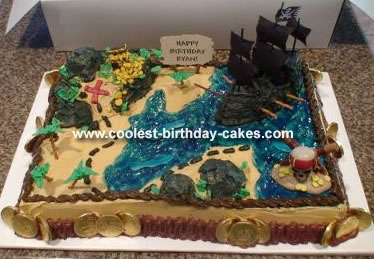 My son was having a Pirates of the Caribbean birthday and wanted a cake to match. We like some of the pirate cakes and we liked the treasure map cakes, so we decided to combine and make a cake that incorporated both concepts.

I used a half sheet cake. I used extra cake batter and made a couple mini loaf cakes, mini muffin cakes & mini heart muffin cakes. I used these to make pirate ship and build terrain on the island. I used two loaves and then heart cakes to build up pirate ship. I added root beer barrels and malted milk balls onto the ship for accessories.

I cut out paper for the masts and put on little sticks. I cut a couple of pieces of cake to make treasure chest and then took a toothpick to make top look open. I bought gold nugget bubblegum and poured that out of the treasure chest.

I used blue gel icing to make water and added some gummy sharks in the ocean. I used bubblegum coins around the bottom edge of the cake. I made sure I brought more sharks and gave each child a shark and coin with their cake, because they all wanted some of the candy. This was my son’s 6th birthday and it has become a family tradition to do his cakes.