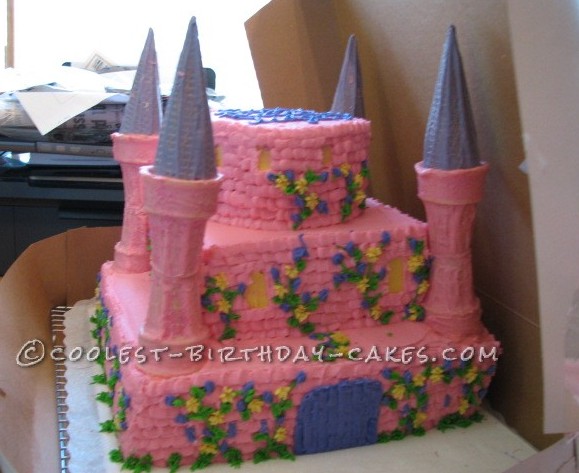 This pretty pink princess castle cake was humongous!  I made the base of a 14x14x2 double layer cake, the second layer was a 12x12x2 double layer cake, and the top was a 10x10x2 round double layer cake.  The cakes were supported on cardboard and I used lollipop sticks to support the weight of the layers. It was the first ever stacked cake I made, so I didn’t have all the stuff needed and just used what I had on hand. It did make it to the party!

The castle turrets turned out really awesome. I used 2 ice cream cups spread with tinted pink candy melts and placed them bottom to bottom. I pressed them until the candy melts dried and held the ice cream cups together.  I sprinkled them with Wilton’s Pink Cake Sparkles. I used an ice cream sugar cone for the turrets, spread with tinted purple candy melts and sprinkled with Wilton’s White Cake Sparkles to give them a sparkly shimmer. I pressed them into the top of the stacked ice cream cake cones, until they dried.  It only takes a few minutes. You can add a little more to coat the inside the top of the cone where they come together.

I pressed the completed turrets into the corners of the cake after it was decorated with butter cream frosting.  I really love the ice cream cup turrets, using the 3 ice cream cones really gave it a real castle look!  If I make this design again, I would cut spaces in the the tops and add small windows and maybe more vines going up the sides of the turrets as well to make it more realistic.

I piped flat purple strips for the castle door. Then I used the grass tip to make random green grass around the sides of the castle. This cake was really heavy, so I had to support it, and just used the 16×10 cooling rack to support the weight. I transported it in a 1/2 sheet box with the sides and lid taped, since it didn’t really fit. It turned out to be an awesome pink castle for a little pretty princess! 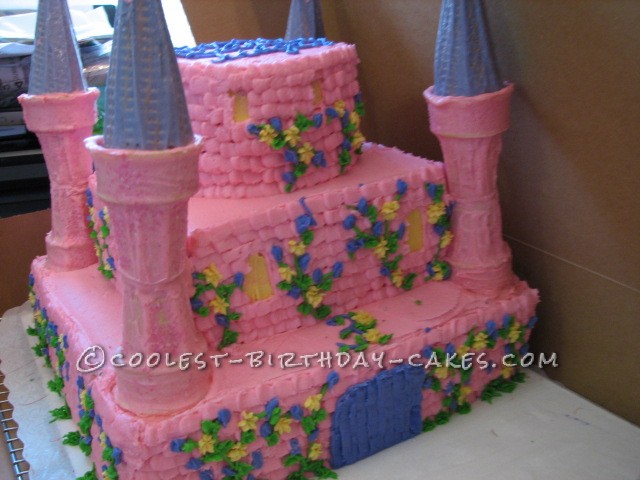 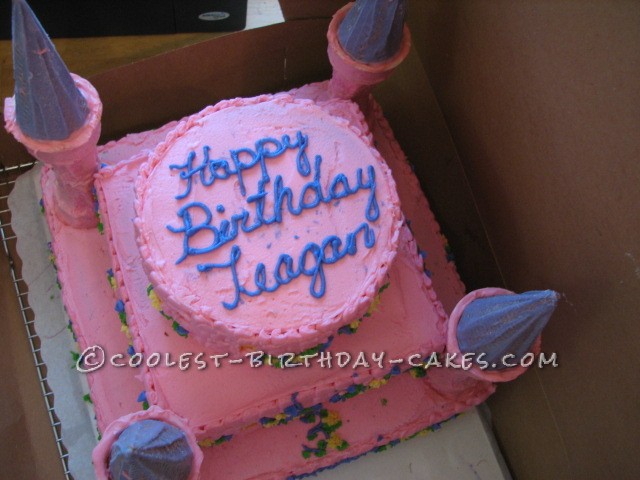