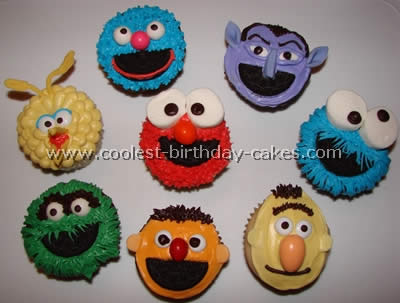 These Sesame street cupcakes were really fun to do for a friend’s son’s birthday party. For the furry characters always work from the outside edge of the cupcake inward doing the center last.

Elmo: To ice the cupcake use red frosting and a small star tip to give Elmo a “fuzzy” appearance. Gently saw an Oreo cookie in half and press half of one cookie in place for his mouth. The eyes are made from one large marshmallow snipped in half with kitchen shears. (Snip a tiny piece from the side too to make the two eyes stick together in the middle.) Use chocolate frosting and a medium-sized round tip to make the dots on the eyes. Use an orange peanut M&M for his nose.

Grover: Use blue frosting and the same tip you used for Elmo for the fur. Use another Oreo, half for the mouth but instead of pressing it straight down, angle it a bit so the round edge of the cookie sticks out in front. Cover the top edge of the cookie with more little blue stars. Cover the white Oreo filling with a piped red line. Use white gumballs (or white M&Ms) for the eyes (add chocolate frosting dots) and a pink gumball (or pink M&M) for the nose.

Bert: Ice him smooth with yellow frosting. Place white M&M eyes. Draw chocolate dots on his eyes and a fairly straight mouth. Draw his eyebrows (short vertical lines in a curved row). Place the orange Jordan almond nose and use Wilton yellow giant sprinkles for ears. Use the hair tip for his top knot.

Ernie: Ice smooth with orange frosting. Use a half Oreo for the mouth, M&M for the eyes and red peanut M&M for the nose. Use orange giant sprinkles for ears and hair, similar to Bert’s. Cookie Monster: Use the hair tip and blue frosting to make his long fur. Press the half-Oreo mouth in place and then make some more fur hanging over the top of the mouth. His eyes are done like Elmo’s; be sure to make his pupils all “kooky”!

Oscar: Green fur and half-Oreo mouth done with same technique as Cookie Monster. White gumball eyes (could use white M&Ms). Draw his eyebrows with chocolate frosting. Big Bird: Using yellow candy melts draw some long thin triangles on a sheet of waxed paper (twice as many as the number of cupcakes you need). Make the same number of short squiggly lines with ovals (“feathers”) at one end. Pop it into the fridge to harden. Try using a medium round tip or a U-shaped tip to make yellow feathers all over the cupcake. (One can also use a leaf tip.) Notice that above his eyes Big Bird’s feathers look a little longer so try to mimic that effect on your cupcakes.

Place two gumballs or M&M eyes. Draw eyelids in blue. Draw a red mouth on the flat side of one of the candy melt “beaks” you made earlier. Stick two beaks right below the eyes and two candy melt feathers at the top of the head.

Count: Ice smooth with purple frosting. Use half-Oreo for mouth. Use the leftover small snips of marshmallow from Elmo and Cookie Monster’s eyes to make the Count’s eyes. Edge the eyes with purple frosting to make the size of the white part equal. Use chocolate dots for pupils. I used little bits of fondant for the ears and nose. Meant to draw some white fangs on his mouth but forgot!

It took me quite some time to complete these Sesame Street cupcakes but the end result was worth it. 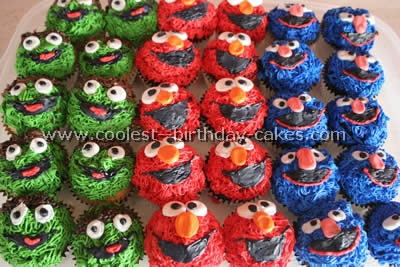 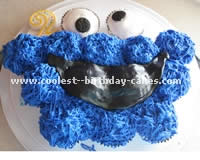 The Cookie Monster cake is a bunch of cupcakes swooshed together and frosted as one cake. It made dishing up the cake so easy! 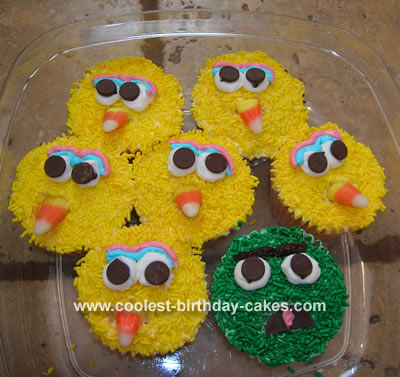 My three year old daughter wanted Sesame Street cupcakes. These were easy; kids can help and have fun. I used a box cake mix and a large tub of store bought white frosting. I mixed some food coloring into cups to make red, yellow, green and blue. You do not have to make the frosting colors dark because you dip them into the same color sprinkles anyway (too red a frosting makes the kids whole mouth red so pinkish color is okay). The sprinkles make the cupcakes seem “furry”.

Then I put white vanilla frosting into a zip top bag cut with a little hole ( if you do not have a piping bag with round tips) to squeeze eyes on each. Big Bird gets a stripe of pink and blue for eye lids.

An upside down chocolate chip is a perfect round pupil in the white of the eye (black frosting can also be used but makes your mouth black!) 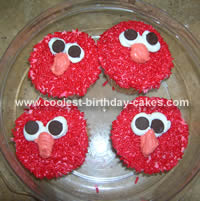 My daughter loved putting the chips on. Oscar’s bushy eye brow is a raisin almost cut in half then opened on top of the eyes. (You can also use a chocolate brown cut piece of licorice same idea if you make a Bert cupcake for his uni-brow or Ernie) Then squeeze out an oval lump for Elmo’s nose. Candy corn is Big Birds beak. A vanilla wafer shoved into the area for Cookie Monster’s mouth (you can also use a chocolate chip mini cookie) half a round chocolate melt for Oscars mouth.

The Sesame Street cupcakes can be baked in a metal silver cup cake paper to seem like a trash can. Get creative and enjoy. They were a big hit. PS – put the cookie in Cookie Monster’s mouth last minute before serving or else the cookie gets soft overnight. 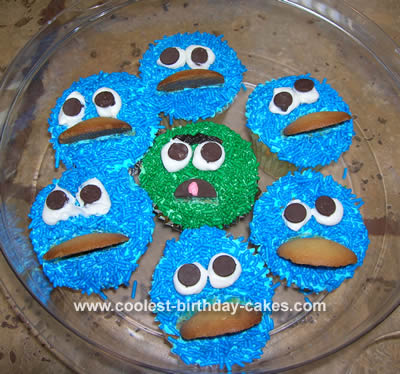 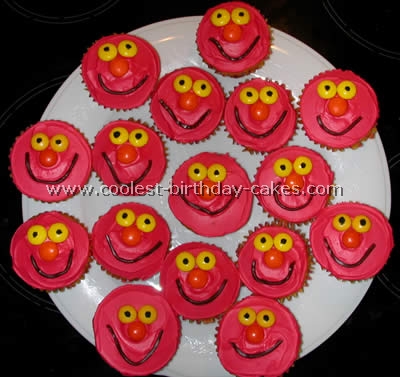 For my daughter’s 2nd birthday I did an Elmo party.

I made these cupcakes – just the right size for little hands – and easy enough for Mom to make. I decorated cake-mix cupcakes with red frosting and used candy for face features: yellow M&M’s with a dot of black frosting for eyes, orange M&M’s for nose, cola-flavored licorice for mouth. (Note: make sure ‘m’ on M&M’s are facing down!)