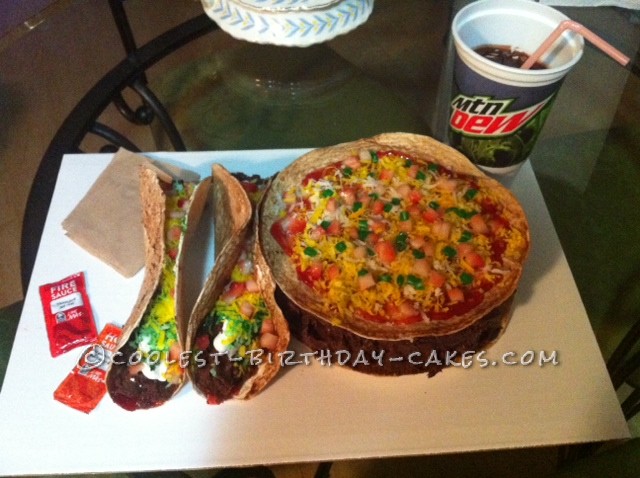 My daughter loves three things in this world more than anything – Taco Bell, JRR Tolkien, and her friends.  So, for her 16th birthday, I decided to throw her a surprise party that combined all three.  Her favorite meal at Taco Bell is the #4 combo with a Dr Pepper, so I made her cake to look just like one.  It was easy to assemble, once I figured out how to do it.

Basically, the tortillas are exactly that – tortillas. I crisped them in the oven and then brushed them with a mixture of cocoa, butter and sugar to make them shiny and sweet. The ground beef is simply a chocolate box cake. The cheese and the lettuce are just coconut that I colored, the sour cream is marshmallow, and the taco sauce is strawberry jam. I chopped up strawberries into little squares, making sure to remove the outside seeds, for the tomatoes, and the green onions are simply green fruit roll-ups, rolled small and sliced.

She had been asking her friends to come see the new Hobbit movie with her and everyone told her they were busy that night. So, when the time came, she was a little down, thinking it would be just me and her going. I had given her cake to our youth pastor and asked that everyone be at Taco Bell early.  I told my daughter we’d stop for a bite before the movie, but of course, when we got there, all her friends were there! She was actually confused for a minute, until she realized they were there for her! Then she was shocked and very happy! Her reaction was wonderful, and she was so excited that her friends had come!

Everyone loved the cake, and kept asking if it was all edible, or if it tasted like a cake at all. No one could figure out what I made it out of, especially the tomatoes.  My daughter took it to the Taco Bell employees to show them, and they got a big kick out of it too.  We even had some of the other customers stop by to look at it and they made comments about how good it looked.  So, after we all ate the real Taco Bell (her choosing the #4 with a DP, of course), we made her stand up on a chair while we sang Happy Birthday, then we all had a piece of the cake. Which, tasted quite good!  After cleaning up our substantial mess, we happily left Taco Bell and walked over to the theater to enjoy the Hobbit.  She said it was the best birthday she’d ever had. 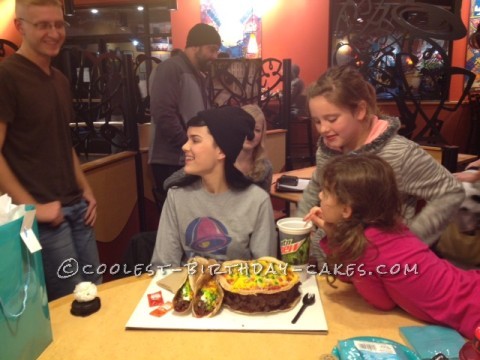 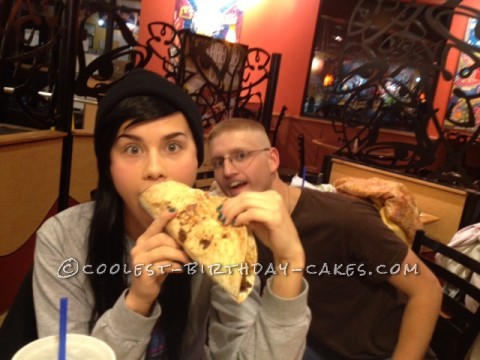 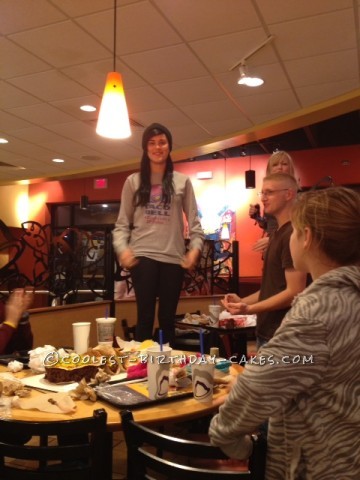 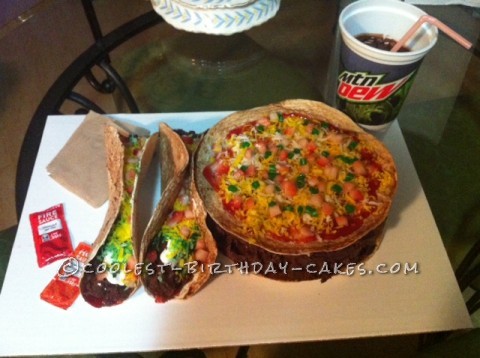