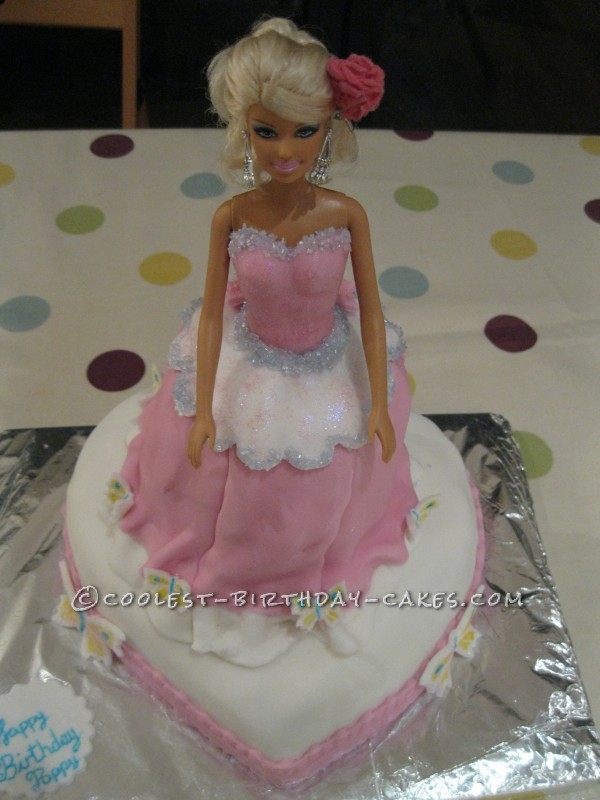 It is coming up to my little ones 4th birthday, we always have big parties as an excuse to gather all our friends and family together for one big event every year. With little one starting school in September and her little friends all heading off in different directions, I wanted this one to be … Read more 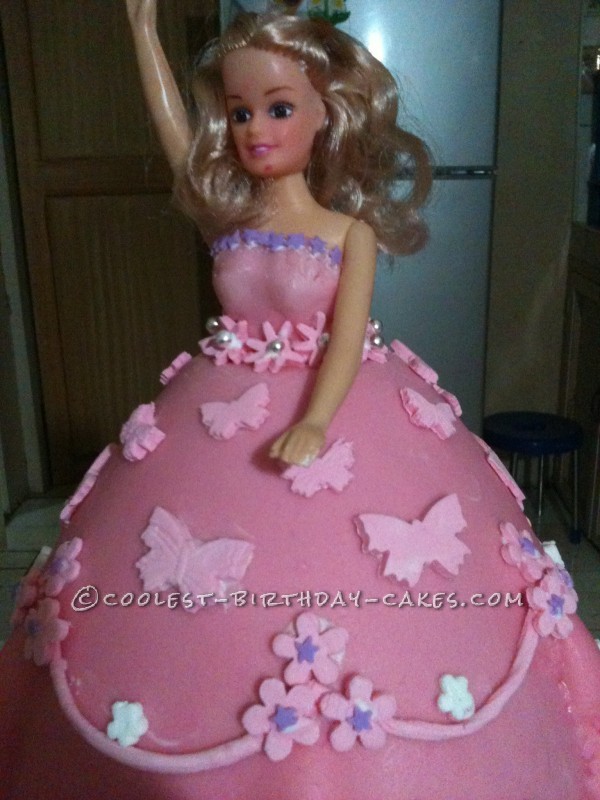 A week after my rolled fondant seminar, I tried my skill to put in practice what I learned. It was smooth procedure doing my first ever doll cake. Though, was also with an aim of giving a first hand learning to my 3 grand children who were on their summer vacation. With them, we went … Read more 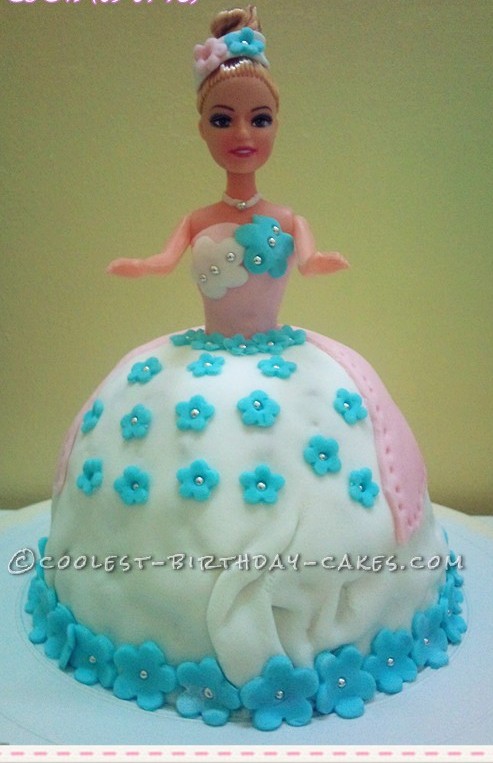 My 2nd girl’s birthday is coming and thought to bake her a birthday cake. Searching from the internet to get ideas she saw the Barbie doll cake photo and then requested it for her birthday. Never done fondant before, it’s really a challenge for me. Although I like baking very much but never done decorating … Read more 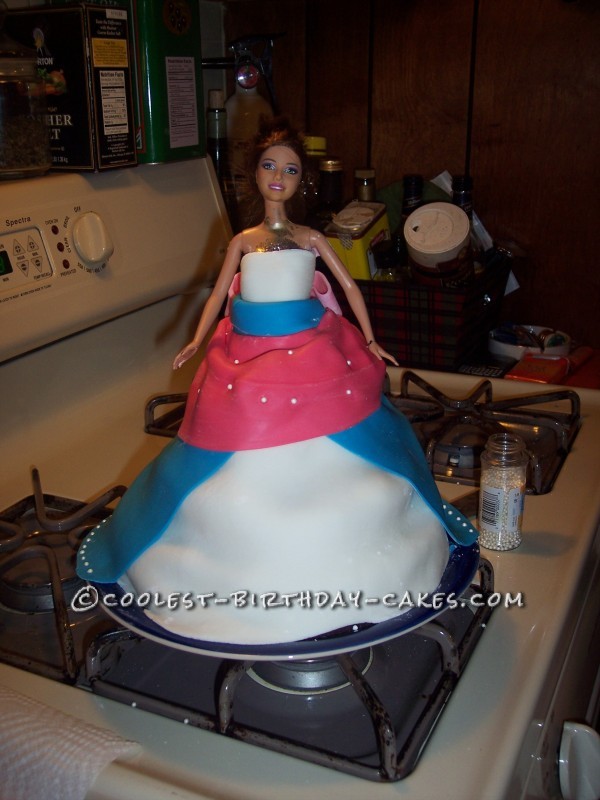 I had to be away for my daughter’s 7th birthday last fall. I promised her when I got back and we were all settled that I would make her any birthday cake she wanted and we would have a very belated birthday celebration. My daughter wanted a fairy princess cake with a Barbie in it… … Read more 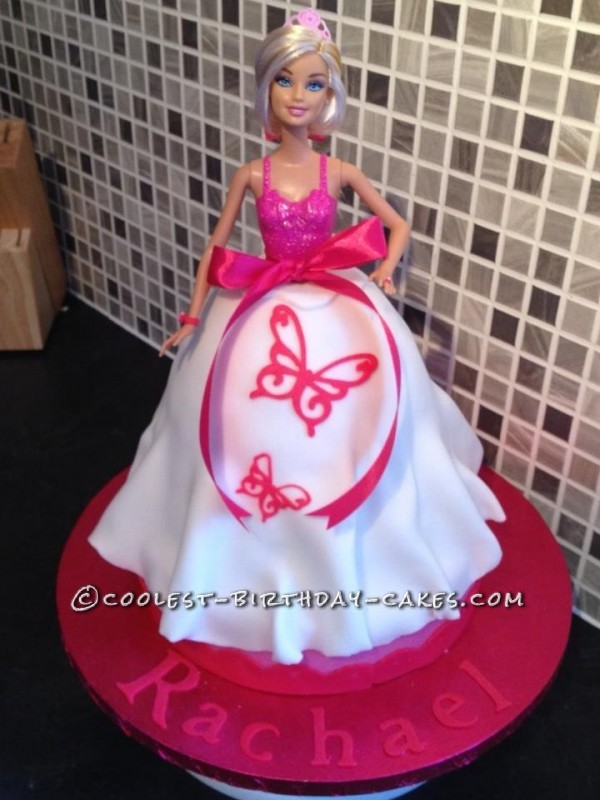 You know all us girls never grow up and give up our Barbie dolls. When I was asked to bake a friend’s daughter’s 21st cake I jumped at the chance to make a Barbie birthday cake. Having never made a doll cake, I was frightened in case it looked like a toilet doll, you know … Read more 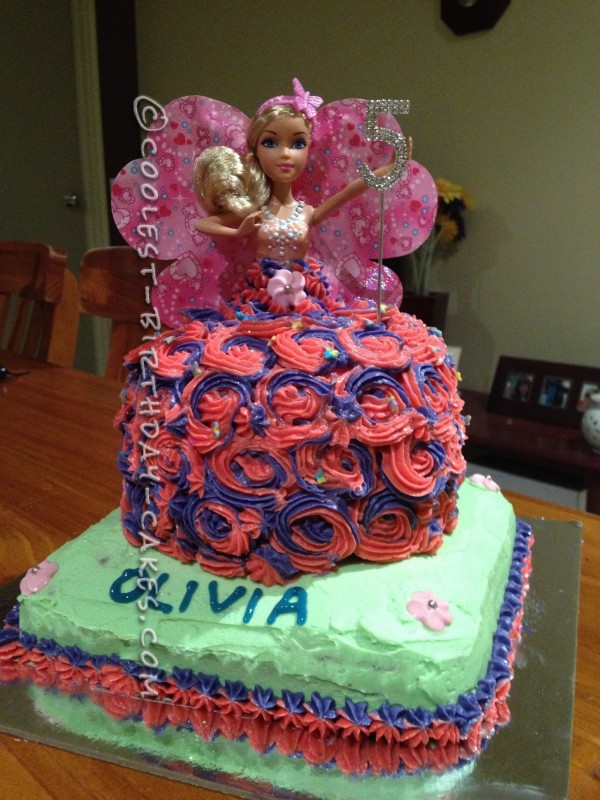 I was asked by my cousin if I could make her daughter a birthday cake for her party. I was super excited and said yes as I made her other daughter’s 3rd birthday cake last year. I went with the classic Barbie Doll cake but a modern take on it. I was so excited to … Read more 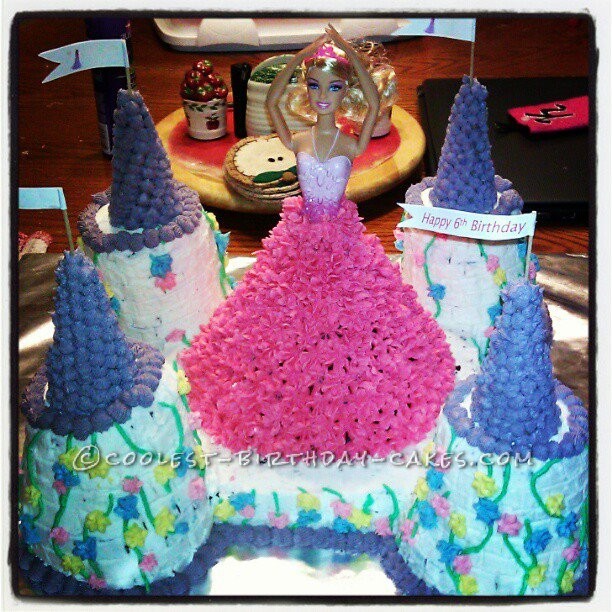 “I have $20 for a cake and a party”, are the words that motivated us to make this cake.  My dad’s friend’s girlfriend had just left him, right after he found out his mom had passed away.  After funeral expenses, Christmas and recently being a single parent he had food stamps and 20 bucks to … Read more 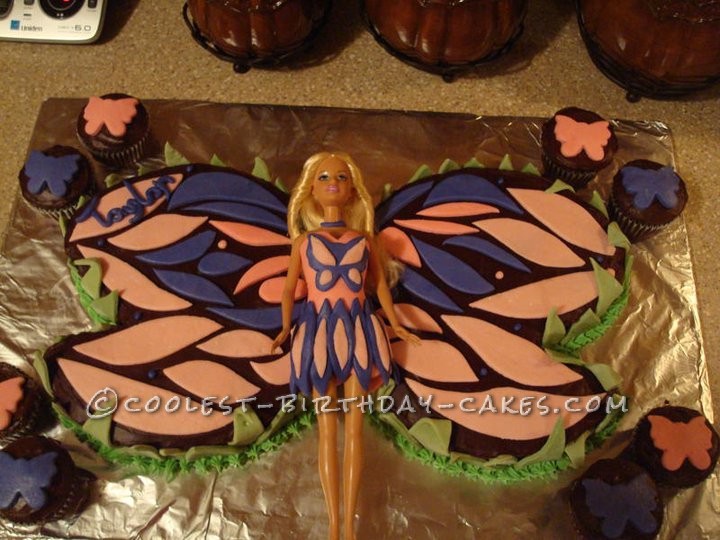 This Barbie Mariposa cake was a very fun cake to create, we spent a lot of time laughing while trying over and over again to make Barbie’s “outfit” look just right. This cake started out as two simple chocolate 13 x 9 cakes. By shaping the first cake, tracing on paper and mirroring the cuts on the second cake … Read more 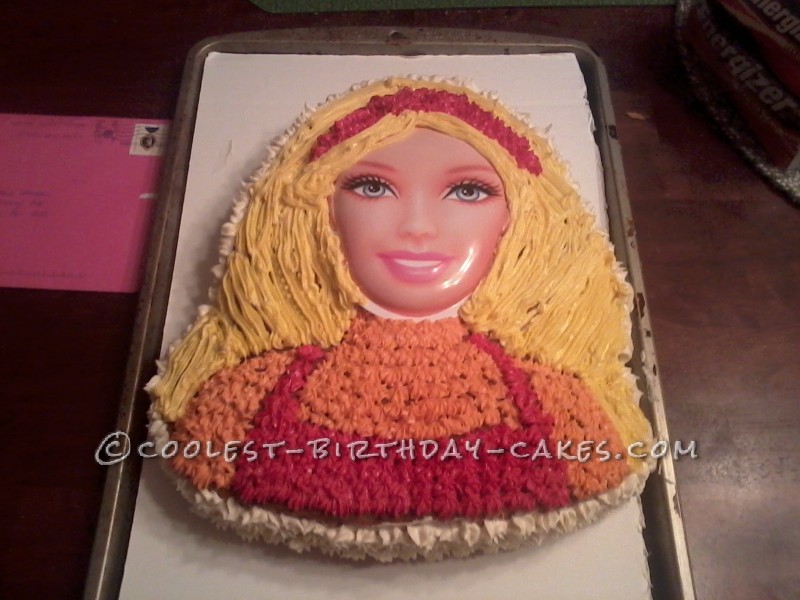 Loved this Barbie cake! I used the Wilton Barbie cake pan and followed the pan directions on how to bake it. I used a white cake mix and a homemade butter cream icing.  It really did not take that long to make and my daughter loved it for her birthday!  The face is plastic so you don’t … Read more 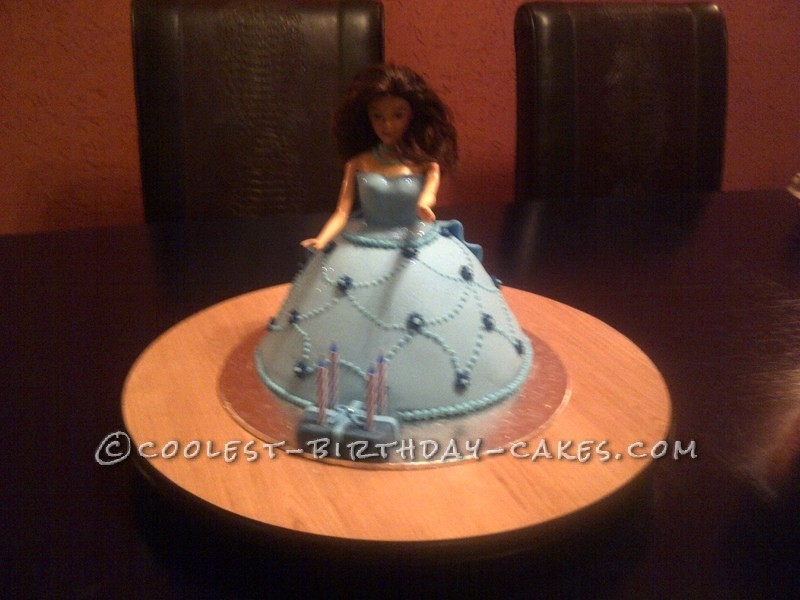 I must admit, this doll cake was more difficult than I thought. Nevertheless, it was still a masterpiece to my little girl. I used the Wilton doll cake pan which comes with the doll stick. The baking part was easy, the decorating part was tough. I put chocolate ganache over the cake once it cooled … Read more 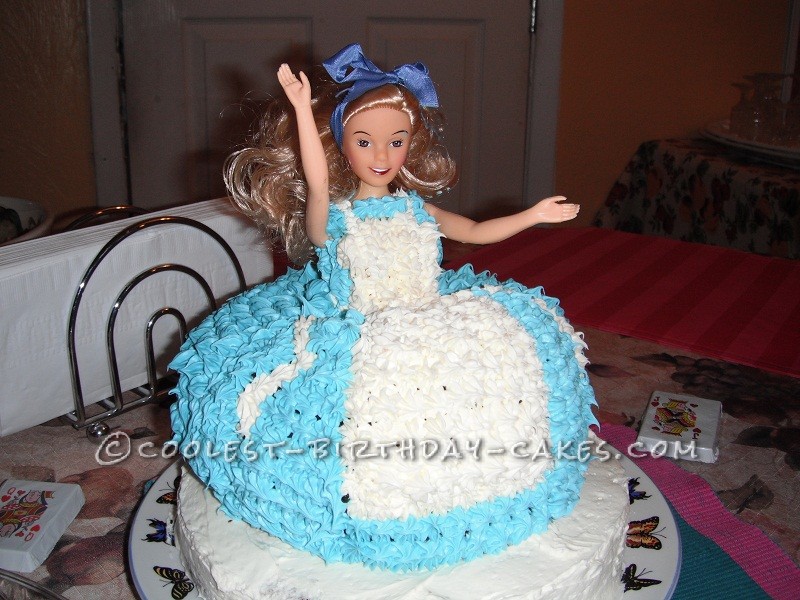 My daughters keeps me busy each year with themed homemade cakes. It is a lot of fun to make them and figure out how the design is going to work.  This year was Alice In Wonderland.  I used a doll that she had that resembled Alice and wrapped the doll in saran wrap to protect it. Next … Read more 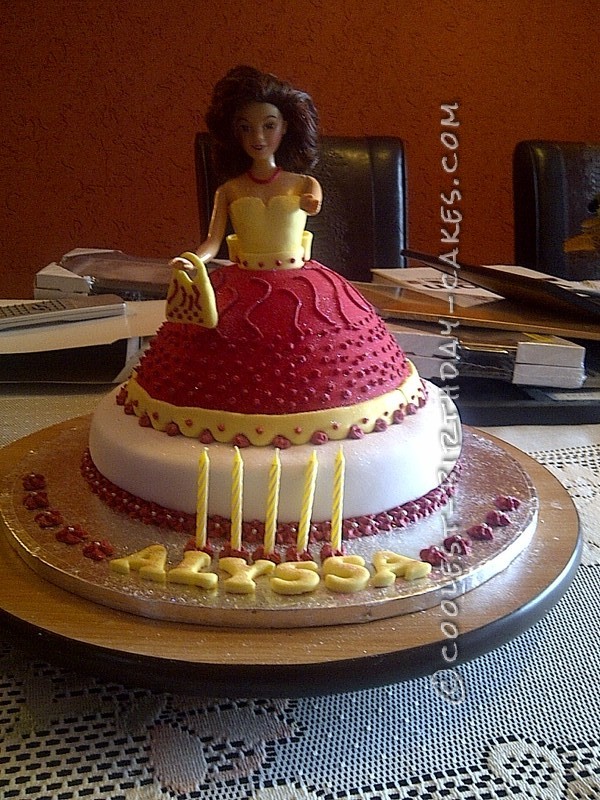 Considering my first attempt to be somewhat a success, I decided to give it another go. This time, I baked two cakes, one round one for the bottom and then the doll cake itself. I rolled out the fondant and then as I unrolled it with the rolling pin so that it covered the cake … Read more 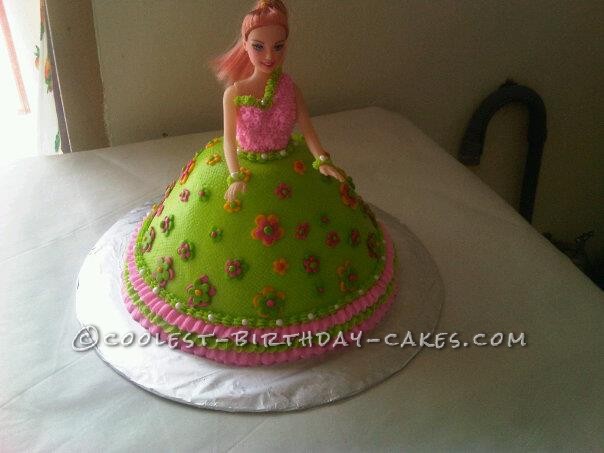 I made a vanilla cake which was very easy to make. The flower girl birthday cake was for a little girl who turned one so I decided to color the icing with fresh colors like electric green and pink. In advance I made flowers of fondant with also fresh colors. After icing the cake I had a little problem with … Read more 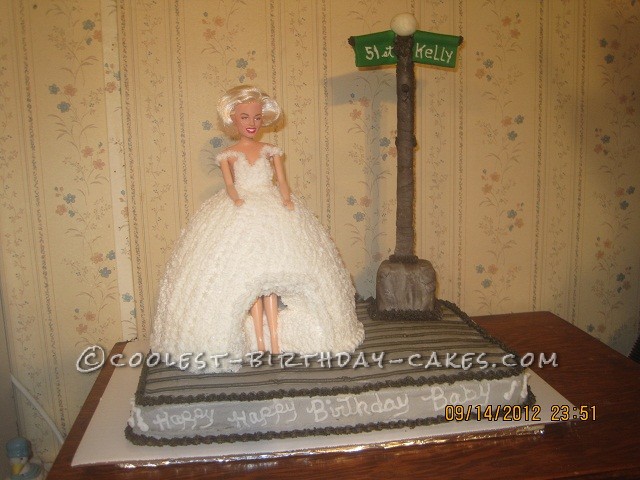 I was asked by a friend if I could make a cake for her sisters birthday that had a Marilyn Monroe theme to it.  She also wanted to know if I could make it with a Barbie doll dress type cake because her grandmother had always made them doll dress cakes for their birthdays when … Read more 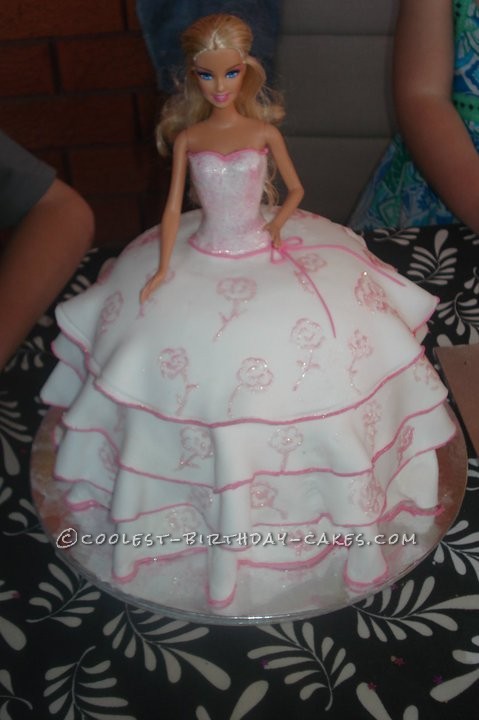 My daughter wanted a Princess cake for her birthday. I had never made a Princess cake before and I thought I would give it a go. I bought a glass round bowl that was oven proof and two round cake tins. Then I made three round cakes and one bowl shaped cake then once cooled placed … Read more 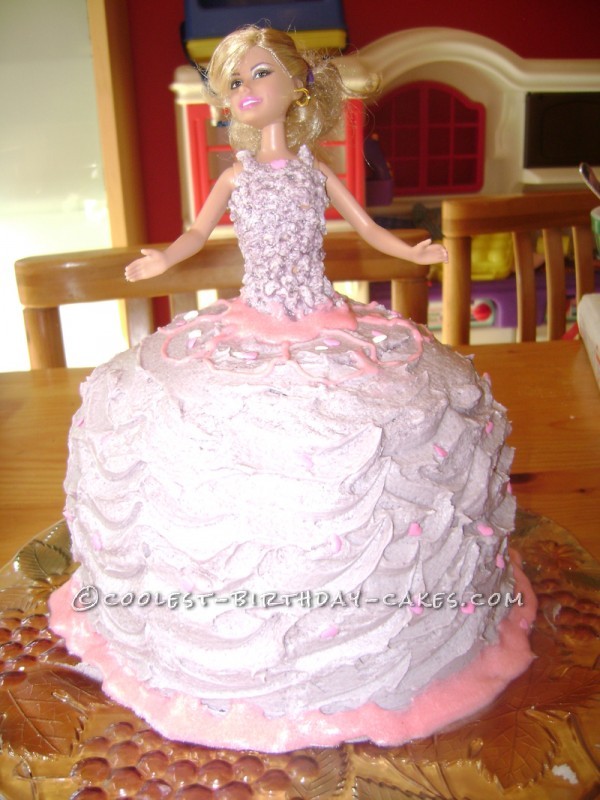 This Barbie birthday cake sells for up to $60 (or more!) in stores, but you can make it with time and patience. The dress is a cake baked in a Pyrex bowl. You can use a Barbie you have on hand or buy the torso at a baking supply store. I cut a hole in … Read more 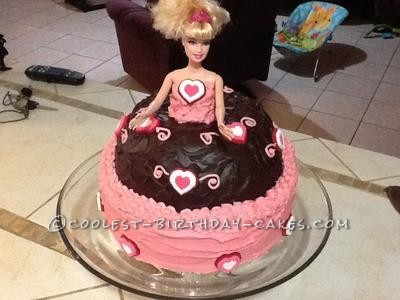 My daughter Ramiyah requested a ” Princess Doll Cake” for her birthday this  year. I recently started baking and thought it would be fun to make one instead of purchasing one.  I  sought inspiration online and then set about gathering ingredients.  This cake was prepared using a 9″ round and an old ovenware dish that … Read more 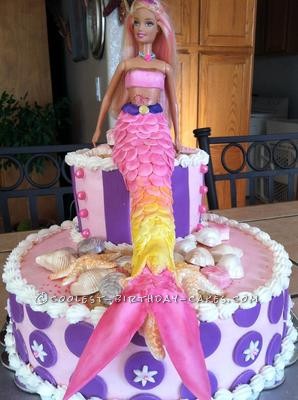 Every year I’ve made my niece a cake for her birthday. This year for her 5th birthday she requested a Barbie cake. Trying to think out of the box and create something other than the traditional Ball-gown Barbie proved itself to be a bit of a challenge. To my delight I found out that one of her … Read more 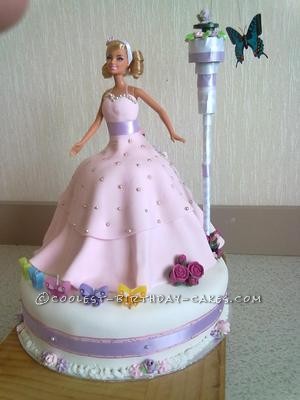 This is my first attempt at a Barbie doll cake. This was made for my partners 5 yr old daughter. The base is a 11″ round banana cake with strawberry butter cream and white icing. The dolls dress is also banana cake and again with butter cream and pink colored icing. All flowers are edible as too … Read more 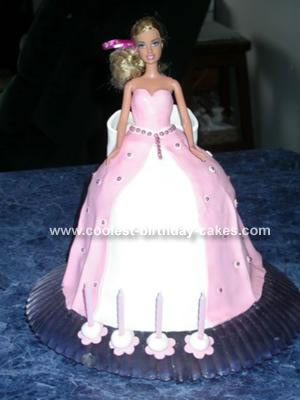 Take a look at the coolest homemade Barbie cake ideas. You’ll also find loads of homemade cake ideas and DIY birthday cake inspiration. My daughter wanted a Barbie cake for her fourth birthday. I wanted to do one that had the entire doll inside, as I did one for my older daughter when she turned four, … Read more