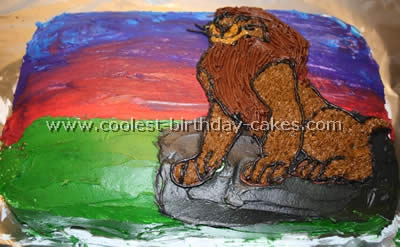 My daughter chose the picture for her theme birthday cake from Disney’s Lion King Book. I made a basic cake from a mix in a 9×13 pan. I spread a thin layer of white butter cream frosting over the entire cake first. Then I mixed royal blue for the top layer of skyline followed by a stripe of purple and then a stripe of pink. I used a butter knife to blend the lines between the stripes and cross the colors to get a more realistic skyline.

I spread green butter cream frosting over the bottom portion of the cake and created “Pride Rock” with black and a touch of brown. I copied the picture of Mufasa (the Lion King) from my daughter’s book and cut it out. I laid it on the cake and traced around it with a toothpick making an indentation for the outline. I then piped over the indentation with a #3 tip in black and added the other outlines for the lion’s toes, legs face etc. Mufasa’s body is varying shades of brown with star tip #16 and his hair is with tip #233.

The image of Simba was taken from some Disney partyware.  I enlarged the image on a photocopier, and then traced it onto wax paper using a sharpie pen.  On the backside of the wax paper I retraced the image with black icing gel, and then pressed it onto the green-topped cake.  Once the basic outline of Simba was on the theme birthday cake, I outlined everything in brown butter cream icing, using a no. 3 tip.  I then piped in the rest using tip 16 stars.

The theme birthday cake border was made to look like grass using tip no. 233. The bottom of the cake (hardly visible in the picture) is bordered with white shells with orange, green, yellow and brown mini-M&M’s in between each shell.

This Lion King theme birthday cake was made for a Ukrainian boy named Elicey, hence the Cyrillic alphabet.

My 3yr. old daughter had been addicted to The Lion King. Sadly it’s not a theme cake the stores carry, so we made it ourselves.

For the Lion King cake I baked a 2-layer 9-inch cake, covered it in green-tinted frosting, crushed some Oreo cookies and dumped them down the center for a dirt path.

The characters and palm trees are toys we had on hand. The bugs were just frosting tinted into various colors and drawn out into the “dirt”. She absolutely loved it, plus she takes pride that she had a hand in making her Lion King theme birthday cake.