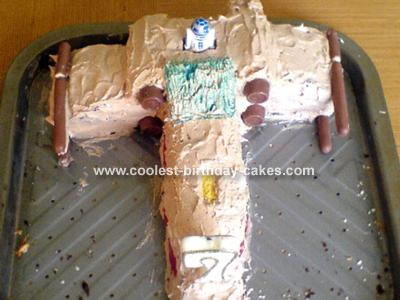 We made the shape of the X wing by cooking two rectangular cakes – one for the wings and one for the body. For the body we split the cake lengthwise in half and put the two together. We angled the end with a knife to give it a pointed nose.

For the wings we cut the cake into four squares and used two squares sandwiched together, on each side, to make wings. We iced everything in chocolate icing, to give it that dirty colour.

To decorate we used Rollos and chocolate fingers, which were for guns, and we put lengths of red licorice down the sides. We used icing pens to colour in a blue windscreen, where the pilot would sit. I borrowed my brother’s R2D2 pencil topper and stuck him into the cake behind the cockpit. We finished it off with a number 7 candle.

It took a long time to make and was quite hard and stressful, but the end result was amazing and worth the effort!