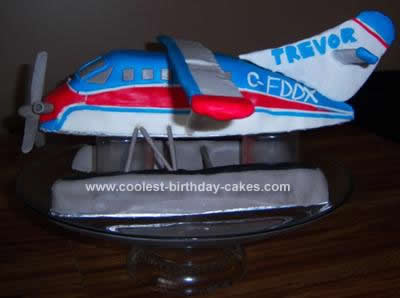 This Homemade Turbo Otter Float Plane Birthday Cake took a lot of time and effort. It is about 90% edible and only feeds about 6 people. 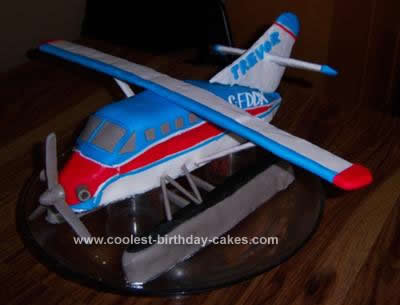 Both the middle of the plane and the floats are real cake with buttercream icing and fondant. The wings, prop, supports and back wings are 1/2 edible and made from tooth picks, Popsicle sticks, cardboard, then iced and covered in fondant. The accessories were all made ahead of time and tried for 24 hours before putting the cake together. The colors were chosen to match the exact airplane that my boyfriend flies. The marshmallow fondant was homemade and dyed. The top of the floats were painted black with fondant dye, water and brush. The real call sign for the airplane C-FDDX was put on the side and my boyfriends name was added to were the company’s name usually put. If your thinking of make a cake similar I can give you more hints if you message me.

I made this Cessna Airplane Birthday Cake for my son’s 4th birthday. He loves planes and wanted a T41 cake (his made up name after watching to many WWII documentaries with daddy). I fashioned this after my father’s Cessna 172 as I know what that looks like. 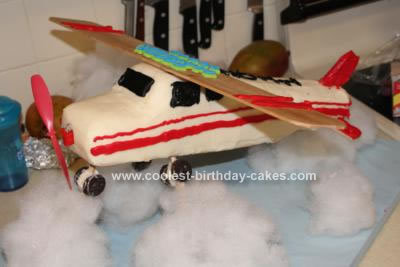 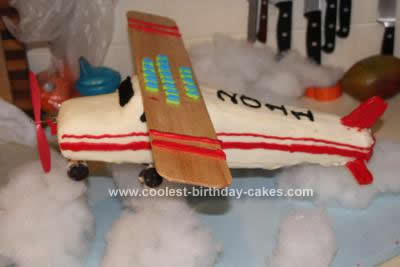 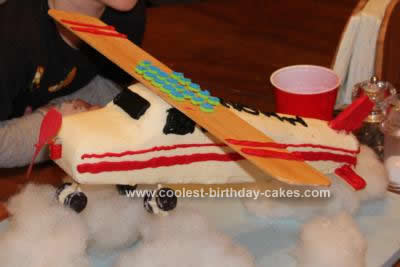 I used a piece of balsa wood to make the bottom support. I think I would use something a little thicker next time as the weight of the cake was almost too much. I then made 4 holes (three in the front and one at the tail) just large enough to run dowels through and glued them with supper glue. Running them through allowed me to put glue on both sides, gave me something to impale/attach the cake to and I didn’t have to try to cut the ends flat and I could level it easily.

I made the cake out of a 9×13 pan and cooled it before cutting and shaping it. I cut one piece the whole size and then just added a second layer where needed it. I crumb coated it and then added the striping with with a small tip. I had originally planned to make the wing out of a thin piece of cake but ended up just using some 1/4 inch ply because of the weight issue.

I put some small dowels on the underside of the wing with points on them and then shoved them in the cake after it was done. For the tail I just cut some balsa wood in the shapes stuck them in and frosted them. I added stripes to the wings and put candy letters on with “Happy Birthday Scott”. I put the year down the fuselage.

For the base I wrapped a sheet of 3/4″ plywood in a light blue plastic table cloth and then covered the supports with stuffing for pillows. I made the wheels with mini Oreo’s glued together with frosting.