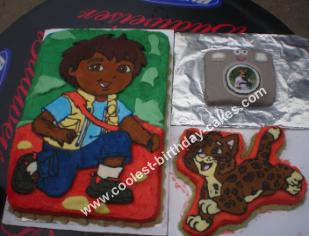 The Diego sheet cake is devils food cake made from scratch, no box, and is approximately 12″ by 15″ on a 13″ by 19″ cake board. So it took two batches. The icing is all homemade buttercream with homemade marshmallow fondant pieces for the bushes and rocks and Click. I got the fondant recipe online … Read more 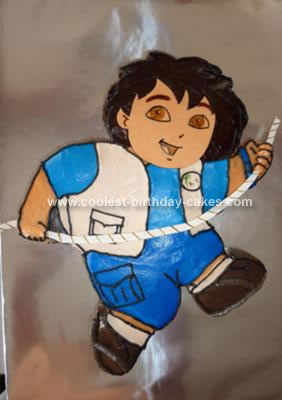 I made this cake for my Nephew’s 4th birthday. I took a picture that I liked and blew it up to the cake size that I wanted and then cut it out. I baked and leveled my sheet cake big enough for my paper cut out to fit on. I then cut out the shape … Read more 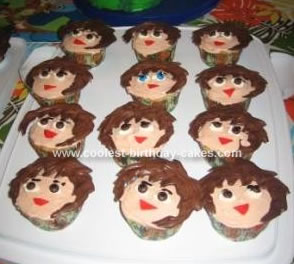 These Diego Cupcakes were made to go along with a Diego Jungle Cake. For the cupcakes I used a template that I printed from NickJr.com for the hair. I used chocolate candy melts and piped the melted candy onto wax paper with the template underneath (A toothpick was useful to spread the chocolate inside the … Read more 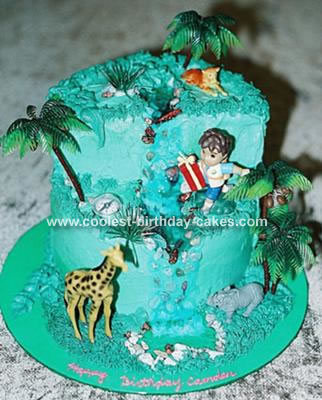 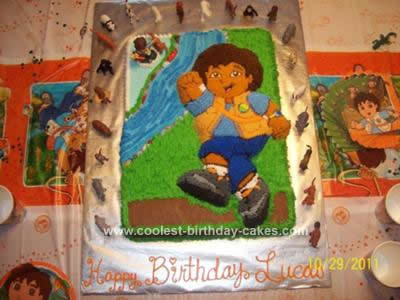 I made this Homemade Go Diego Go Birthday Cake for my nephew’s 4th birthday. I got the Diego pan and icing colors from AC Moore. I started with the base sheet cake and covered it in ‘Sky Blue’ icing. I then added a small section over the bottom of the cake a dark brown, I … Read more 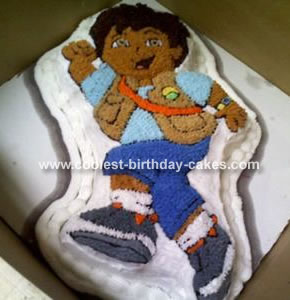 This Diego cake was made for a person I work with. It was for her son’s birthday. She gave me the Diego pan, which I thought would make my life easier. Wrong! I don’t normally use character pans, I draw directly on the cake. When I took this cake out of the pan, I didn’t … Read more 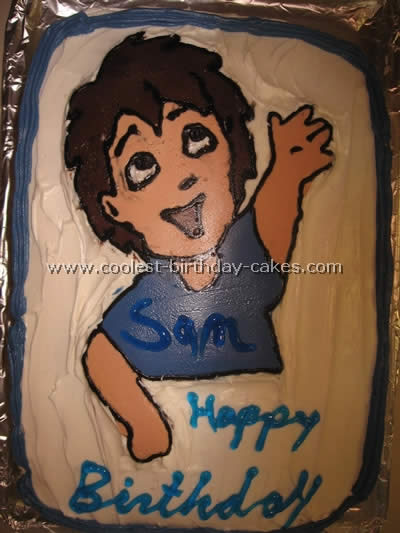 I made this cake for my son Sams third birthday. I searched your site for a Diego cake and this was my first attempt at a buttercream transfer. I downloaded a picture of Diego off the internet and made it the size I wanted. I taped it to a glass cutting board and covered it … Read more 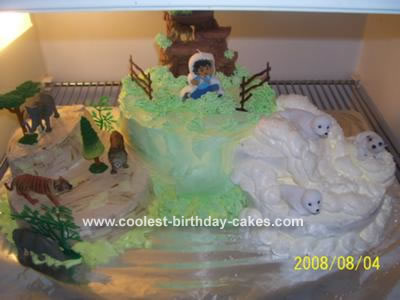 I made this Diego cake for my son and nephews 2nd birthday, there only 3 weeks apart. I didn’t want to do just a simple Diego pan cake so I got brain storming. I made 2-9″ cakes for the “grassland” (part that Diego is on), 2-8″ cake for the side cakes and 1-6′ cake cut … Read more 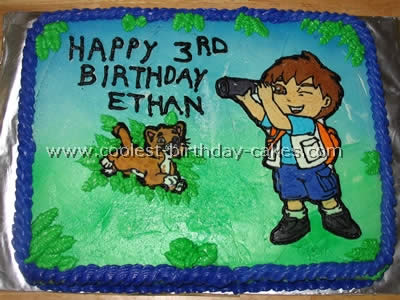 I made this Diego cake for my neighbor who asked if I could make him a cake since I have just started to make cakes for fun. This is a buttercream transfer and my first. I actually got the recipe from this website and the idea of what a butter cream transfer is. I just … Read more 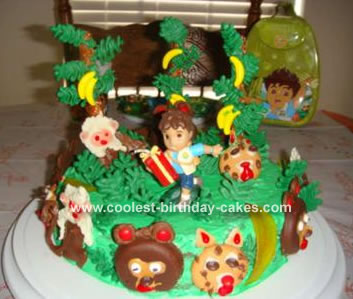 My son loves Diego, so I made him this Diego Jungle cake because I just didn’t want to make a body or head cake. The cake is 2 9×9 with green frosting. The trees are preztel rods with melted candy wafers as leaves and runts. Bananas and monkeys are melted choc. wafers, jaguars are Nilla … Read more 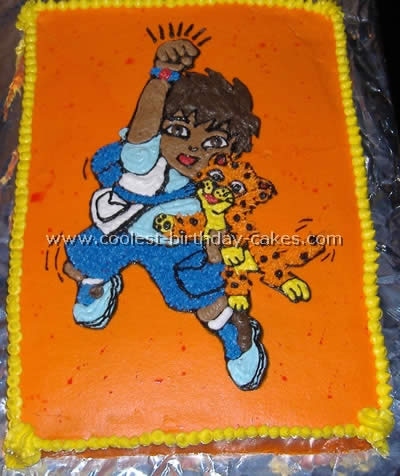 I made this Diego cake for my friends son’s 3rd birthday. I iced a cake orange. I splattered the top of the cake with the same color orange mixed with vodka to give it some added interest. Then I took a picture from a coloring book and tore it out and taped it to my … Read more 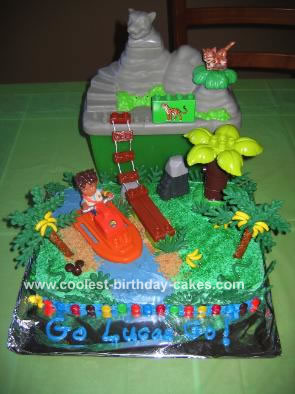 This is my first attempt at decorating a cake, thanks to the great ideas for a Diego cake on this site. I used a Diego Lego’s activity set as inspiration. The cake was made in a 9×13 glass pan. I tinted the store bought frosting with regular food coloring. I added colored sprinkles to the … Read more 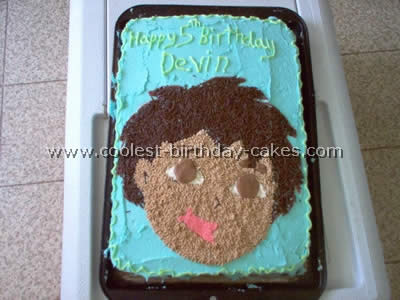 I baked a sheet cake and drew Diego on it and filled it in with frosting. I used chocolate sprinkles for his hair. My son loved his Diego cake and party. We went to our local wild life park and it was a big hit. 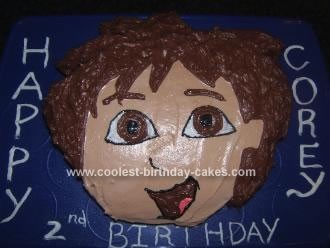 I made this Diego cake for my son’s second birthday. He and his sister had a Dora and Diego birthday. I used a 9 x 13 cake. I used a pattern of Diego and enlarged it. I used it like a stencil. I then used chocolate frosting for the hair and eyes. I used brown … Read more 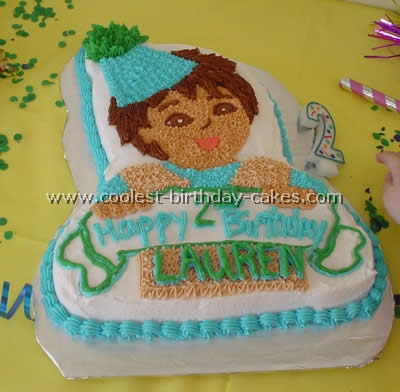 My daughter was a huge fan of the Nick Jr. show “Go Diego Go.” At the time of her 2nd birthday we were not able to find anything with a Diego theme. So, using a Wilton cake pan (Big Bird with Banner), this Diego cake was born.I printed out a coloring sheet from the Nick … Read more 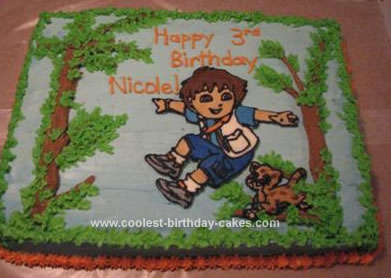 I made this Diego birthday cake for my daughter’s 3rd birthday. It’s just a box cake with butter cream icing. This was my first attempt at a frozen butter cream transfer. I got the cake idea from others on this website. The trees were made with leaf tip- I just dragged it to make the … Read more 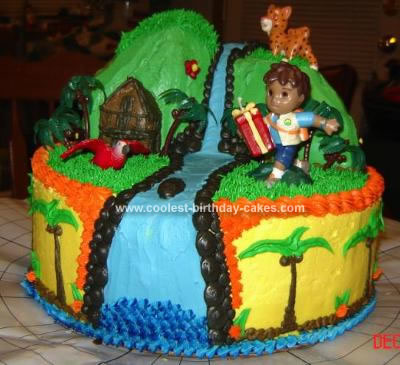 This is the Diego mountain scene cake I made for my son’s fourth birthday, chocolate with banana flavored frosting. Cake was used to make the mountain, the rest was frosting, with the exception of the Diego candle, the plastic baby jaguar, the plastic macaw, and the plastic trees. The lookout tower was frosted cake, same … Read more 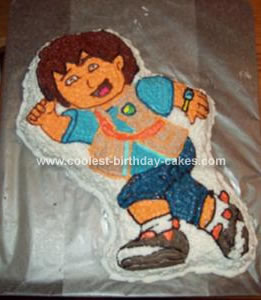 I made this Diego cake for my son’s 6th birthday. It took about 9 hours to decorate this cake. There were at least 12 colors that had to be made. This cake was probably the hardest I have made. I do think that of all the cakes I have decorated, this was the best I … Read more 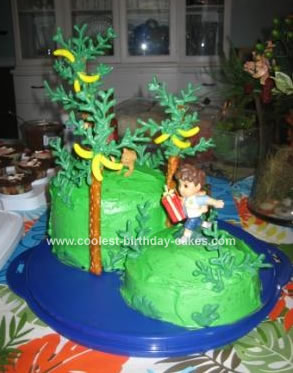 My son wanted a Diego party for his 3rd birthday. I found the idea on the Nick Jr. website for the Diego Jungle Birthday Cake. For the cake I baked three 8″ round cakes. I stacked two together and left the 3rd on it’s own and frosted them all green. For the palm trees, I … Read more 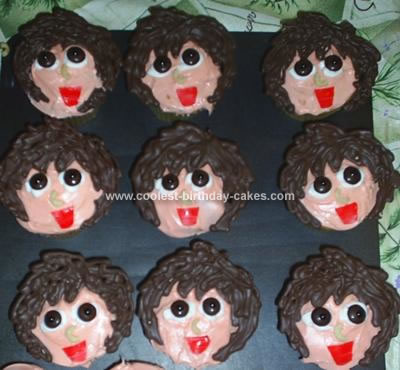 These Diego Cupcakes were so much fun! I found the pattern for them at the Nick Jr. website. I used the stencil to make the hair out of melted chocolate almond bark (CandyQuik). I used M&Ms for the eyes, half a Cheerio for the nose and made the mouth out of a fruit roll up. … Read more 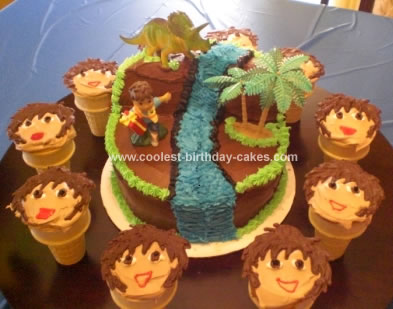 This Diego Birthday Cake is a cake for my three year old. My first attempt at “cake decorating”. Usually I just ice and put a candle on it. This year I used 3 – 9″ cakes with one of the cakes cut in half and stacked to create the “mountain or hill”. A total of … Read more 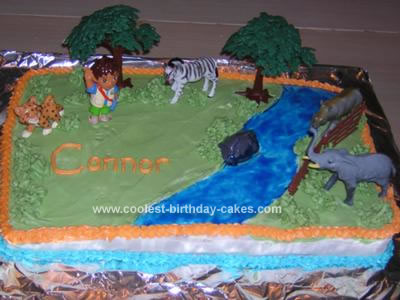 My son picked a Diego theme for his 6th birthday. This particular Diego Birthday Cake was one of my easier creations thanks to a few pre-purchased toy props and a hunt through our toy box. I started with a one-layer cake baked in a large metal roasting pan however this could probably be scaled down … Read more