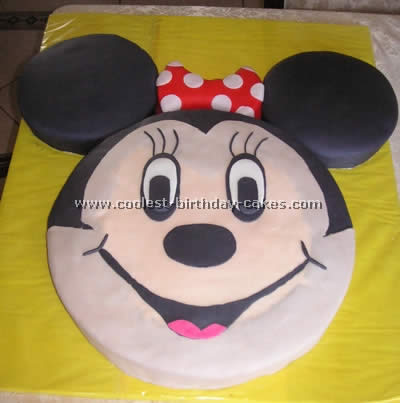 The cake is all covered in fondant. The party theme was Minnie and I just thought it would be awesome to have a great big cake. This is my first attempt at childrens birthday cakes and I got many compliments! 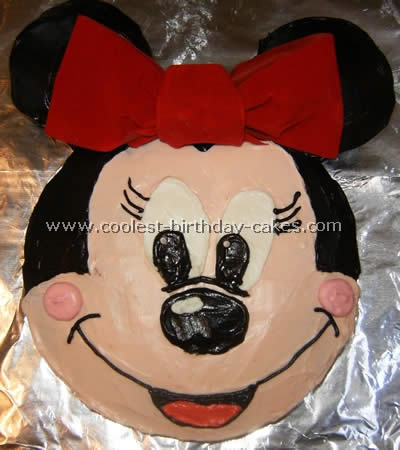 We had a Mickey and Minnie Mouse birthday party for our 2 year old boy/girl twins. At two each kid demanded their own cake! Each cake was made from a 9 inch round pan and two 3 inch cupcakes. I used two boxes of rainbow sprinkle cake mix. I downloaded an image of Mickey Mouse from the internet blew the face portion up to the 9 inch cake size and sketched it on both rounds using a toothpick. To make Minnie Mouse I added eyelashes rosy cheeks and a bow. The cupcakes made the ears. I used flesh coloring added to white frosting for the face and black coloring added to chocolate frosting for the ears eyes nose and mouth. A bit of red color to white frosting was used for the tongues. I used an old Christmas bow for Minnie’s bow.

These were really pretty simple childrens birthday cakes. Most of the frosting was spread with a flat spatula but I piped the facial features (eyes, nose and mouth). At the party the guests were impressed and the twins loved having their own Mickey Mouse cakes. 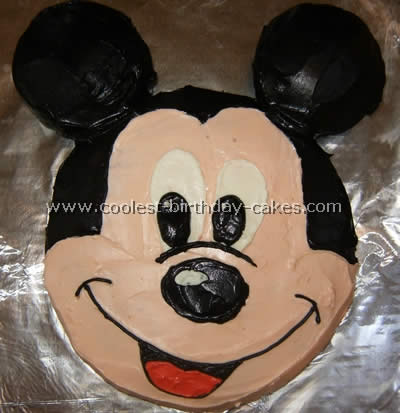 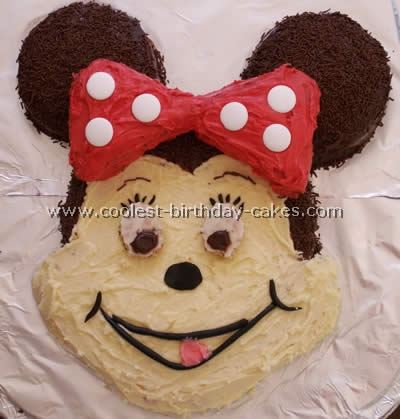 The idea for childrens birthday cakes came from our daughter’s little Minnie Mouse doll which she loves. There are several Minnie and Mickey Mouse cakes in different recipe books and some great examples on this website too. I blended them all to come up with this.

The ears are chocolate cake made with two Pyrex bowls. They are iced with the chocolate frosting that came with the cake then I added chocolate sprinkles too. I cut the face by hand from white cake made in a round cake tin. The bow was also made out of chocolate cake and it is just two triangle pieces laid on top of the cake. The icing on the face is just butter icing with no color.

The eyes are little cookies that I cut and I used more chocolate frosting for the eyeballs. The nose, mouth and eyelashes are all rolled black licorice. As I was adding the food dye for the bow I separated a little bit of icing that wasn’t quite as red for the tongue. The bow was iced with butter icing that I dyed red and I used mints for the dots. 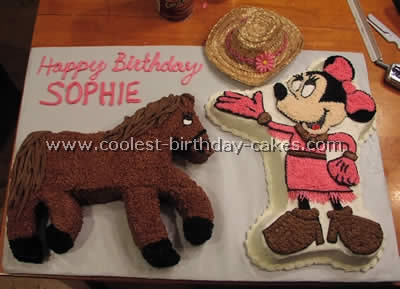 I made this cowgirl cake using a Mickey Mouse pan. I put a dress, heels and a bow and “voila” Mickey became Minnie! Since I needed more servings of childrens birthday cakes for the party than the pan provided I decided to make a horse for Minnie. I baked an 11″ x 15″ chocolate rectangle and cut around an image of a horse I downloaded from the internet and enlarged. I intended to smooth ice the horse but my chocolate icing was too thick and the legs started coming off the horse so I ended up doing drop stars.

I used pull out stars for the mane and tail drew eyes and a mouth and made the hooves black. The hat was bought at a craft store and I hot-glued sequined trim and a silk flower on. Although this picture doesn’t show it I later added twine from the horse to Minnie’s hand as a final detail. 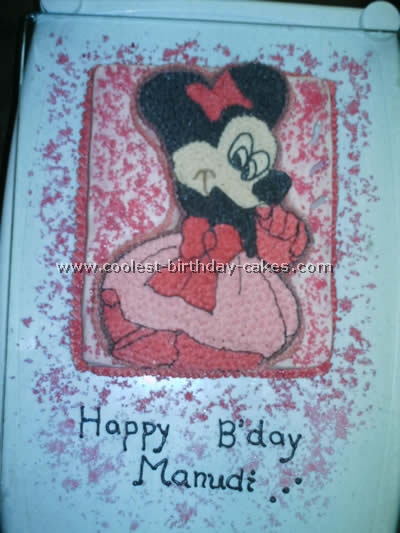 These children’s birthday cakes I prepared for my friend’s daughter. This is her third birthday.

They asked me to do some character cake so I choose mini mouse. I made a 3lb cake First I draw the picture on the cake. I cut off a 1/4″ inch around the cake. I covered the background with hard butter icing. This picture I covered with butter icing (using a number 5 nose) and I used colored sugar for background decoration. 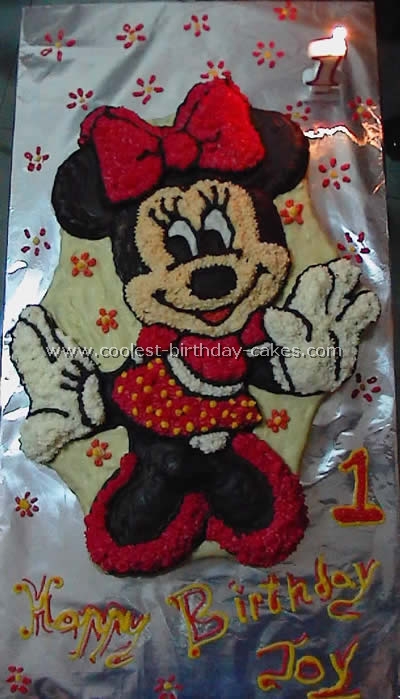 I made this cake for my daughter Joy when she turned one and since she had everything with Minnie mouse, the cake couldn’t miss out. I bought the cake pan for the cake, which made it easier for me since I was a beginner in doing this. It turned out perfectly and then I decorated with butter icing and all of it with a Rosetti tube.

I enjoyed doing it so much that I did 2 of them and dressed Minnie in different clothes.

Worth trying it even if you’ve never baked childrens birthday cakes, just follow instructions as I did and all turns perfect. 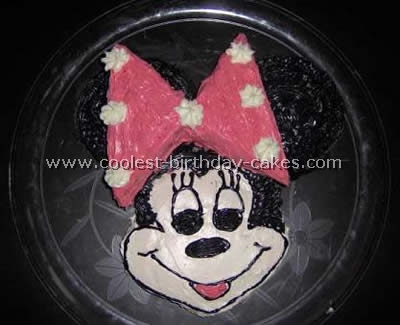 I’d never made childrens birthday cakes like this until my daughter requested a Minnie Mouse cake for her birthday.

For the head, I used a 9″ circle pan, the ears were two 6″ circle pans (found at Michael’s craft store) and for the bow I used one 9″ square pan, and cut into 4 triangles. As far as decorating and drawing the face, it was really quite simple, but tedious. It took 3 hours to ice this cake!

I also recommend when tinting icing black, start with a chocolate icing base. And do get pictures of your guests after with their purpley black tongues! 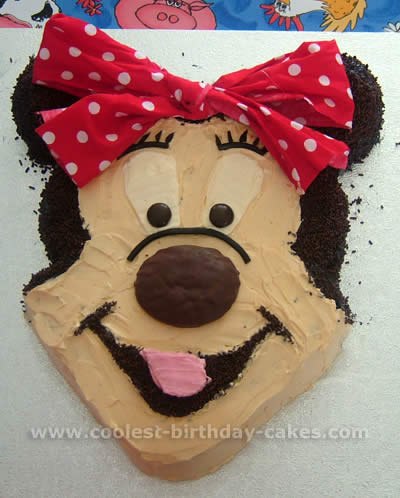 We adore all Disney Characters so I couldn’t resist making my daughter ‘Alexia’ this Minnie Mouse cake for her 1st birthday. I found a Mickey Mouse cake in a Disney cake book. I changed a few things to make it look girly and of course add the red bow on her head. 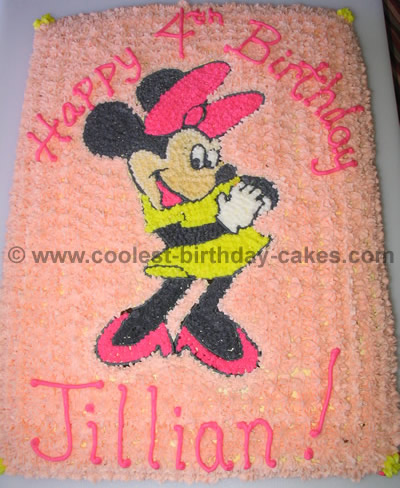 I used a 13 x 15 sheet cake. After removing it from the pan, I first applied a crumb coat. I then placed a cut-out copy of a Minnie Mouse picture I found on the Internet and enlarged to size. I then traced around the outside, freehanded inside the lines, and traced all the lines with black piping of frosting. 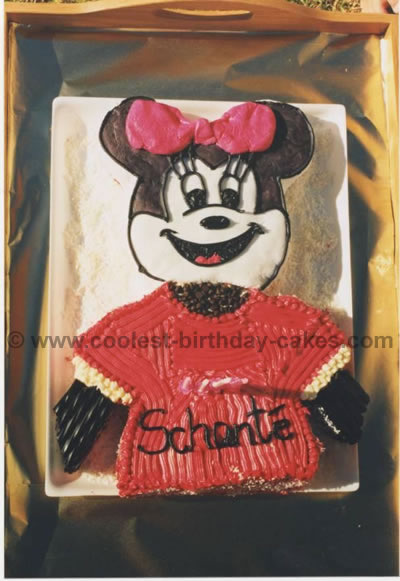 For this cake I found a Minnie Mouse character, printed it and enlarged it to A3. I then cut out the Mickey Mouse character and placed it on the cake, holding it with pins. I cut around the edges so that you have the basic outline.

I then spread a thin layer of butter icing over the whole surface (for each cake I use a 500g brick margarine and about 1kg icing and a lot of different food colorings). Use a toothpick to make “pencil lines” for your insides. I fill in between the lines first and then do the outlines. For Minnie Mouse, I used plastic icing for the head and bow – as you can see from the bow, this was a first attempt working with plastic icing. 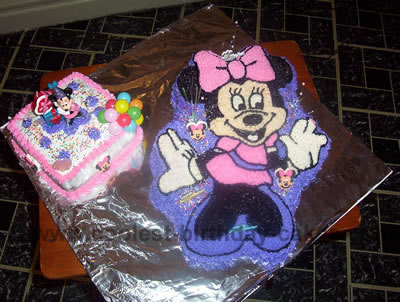