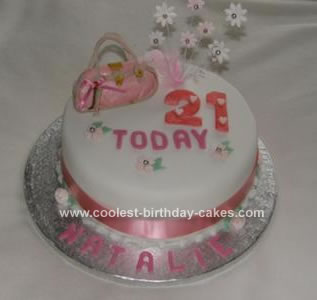 I started this 21st birthday cake by making one of the cake toppers which was a bag. I made this out of flower paste mixed with a little roll out fondant icing. I molded it into shape using my modelling sticks. I then used only flower paste to make the straps and handles, this sets solid. I colored it in brown and placed it onto the bag using a little water.

It was left over night before dusting with shimmer dust. I then colored the catches in gold. And then attached a chain, some glitter cord and a bow and sequin for extra glitz. The bag was then left to dry out.

I then made some flowers out of flower paste and with the florist wire I made a small hook before inserting into the flowers I made. I pushed the wires into a potato so the flowers would dry out, then I made two wires into a spiral by twisting it round a pen. This was then pushed into the potato too. The next day I brushed all the flowers with shimmer dust and added a small silver bead into the center of each flower. I then taped all the wires together and added a feather and this was pushed into a plastic tube ready to be placed into the cake when it’s done.

I started by making a 9” Madeira cake, split it in half and added butter cream to one half and jam to the other. I then covered the whole cake with butter cream and placed it in the fridge to set. Meanwhile I started to make the fondant roses and heart flowers to assemble on the cake. Later these were made in pink fondant.

The cake was now ready to ice, so I rolled out enough white icing to cover the cake. When it was covered I set it aside to harden slightly while I cut out the letters to attach to the cake and the cake board in deep pink.

I was really pleased with the bag and the flower decoration as this was my first attempt. I really hope my niece likes it too. 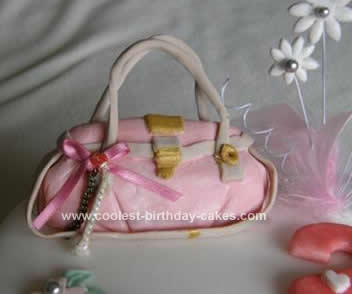 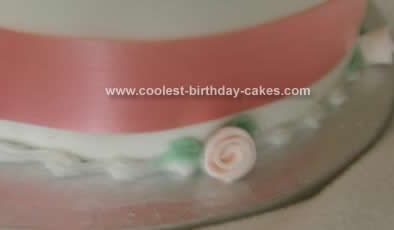