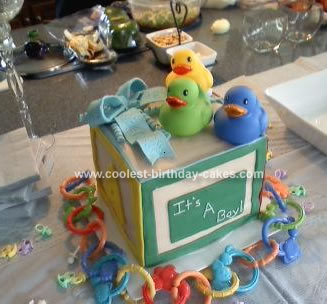 I made a baby block as a Baby Shower Cake. I used an 8×8 pan and stacked four cakes on top of each other with buttercream in between after leveling off the tops. I then iced it in buttercream and smoothed out all of the corners. I then covered the entire cake in fondant tinted between an off white and a beige. I smoothed out all the sides.

I colored red, blue, green, and yellow fondant for the sides. I cut out the border for each side and stuck it on the cake, after I brushed it with a little bit of water. Then I cut out the various letters and shapes for each side and stuck them on the cake. I smoothed out each border and letter. I made a bow out of gumpaste tinted light blue and before I molded it into the shape I wanted I rolled it with a rubber stamp that had hand prints on it.

When the bow was dry I placed it on top after outlining the top with the same gumpaste. I made the little curly cues by cutting thin strips of gumpaste and wrapping them around dowels until they completely hardened and placed them around the bow. I finished the cake of by adding rubber duckies stuck on with some buttercream.