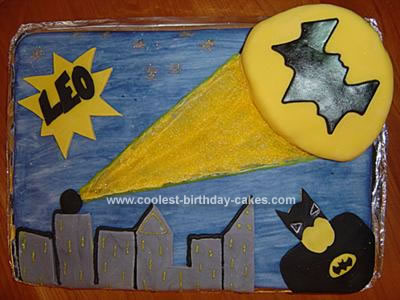 I made this Batman and Batsignal cake for my son’s 4th birthday. It is a home made sheet of yellow cake, spread with yellow buttercream icing and then covered with white fondant icing.

I then washed the cake with some blue paste food colour diluted with vodka. I then dyed some fondant grey and cut out the skyline and put it on the cake. It is outlined with black writing icing. The windows are made with yellow writing icing and some gold glitter stuck on.

I made the light for the bat signal with some buttercream icing topped with yellow sugar and some glitter. The batsignal itself is a round 6″ chocolate cake cut at an angle and covered with yellow fondant. I used a Halloween bat cutter to make the bat out of black fondant.

My husband drew me a template for Batman himself which I then cut out of black and yellow fondant and stuck on the cake. The bat on Batman’s top is drawn with a food writing pen and his eyes are done with silver lustre dust dabbed on with a toothpick.

Around the left side I did a smaller skyline of buildings and on the right is a batmobile cut out of black fondant. My son really adored his cake. 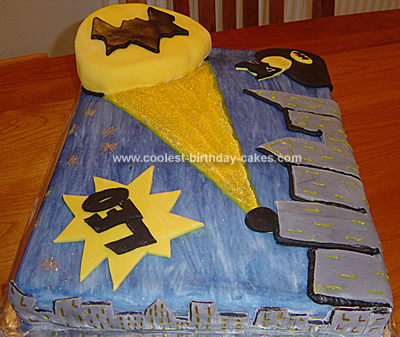