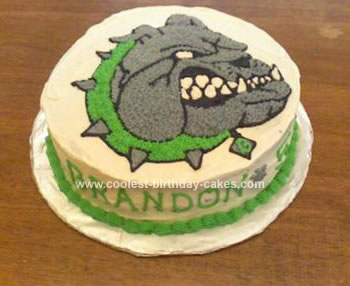 A friend asked me to make her son’s fifth birthday cake. He wanted a Green Bulldog! The school he goes to has a bulldog mascot and, after researching bulldog cakes and images online, I found this image, which I enlarged, for the cake.

I used a 10″ round pan and made a marble cake by combining yellow and chocolate fudge cake mixes together. I then used chocolate pudding filling between the layers and canned white frosting for a base coat.

I drew the bulldog image freehand onto the cake and then outlined it with Wilton black frosting, using a #5 tip. I then used the Wilton buttercream recipe for the gray and green frosting, filling in the bulldog and his collar with a #16 star tip.

Over all it was a pretty easy cake to make! He loved it!