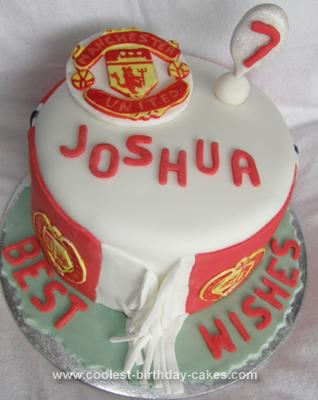 I baked this Manchester United Cake for a friend of mine for her grandson, his favorite football team is Man Utd.

I started by making the football badge. I printed the picture off the net as a template. I used ½ flower paste ½ fondant and cut out the shape of the badge. This was left overnight to set hard. The next day I colored it in. I made one large badge and two smaller ones to attach to the scarf when the cake was finished. I also made a balloon and attached a wire into it. When this was dry I colored it in edible glitter and attached a number 7 out of red icing.

The next day I colored some fondant in red and a small amount in black and kept a small amount of white. This was to make the scarf around the edge of the cake.

I measured around the cake so I knew where to use the different colors and marked this on a piece of paper so I knew how wide to make the pieces, and starting at the front edge leaving the room for the tassels. I proceeded in using the red. I attached this with a little water and before attaching the white piece of icing I attached a strip of black icing in the center of it and then attached it to the cake.

I continued until I reached the front of the cake again. It’s time consuming but I think it’s worth it in the end. I then made the tassels. For this I needed ½ flower paste ½ fondant. This is easier to model the tassels with. I cut out two squares of the icing and on the one edge I used my cutting tool to cut to make the tassels. To attach this to the cake I only wet the uncut edge of the icing and attached it to the one side of the cake making sure the tassels were in the position I wanted, as they will dry hard.

The cake was now finished, I hope he likes it. 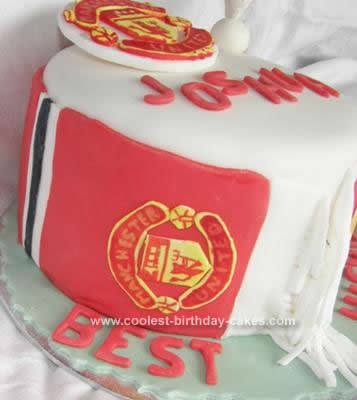 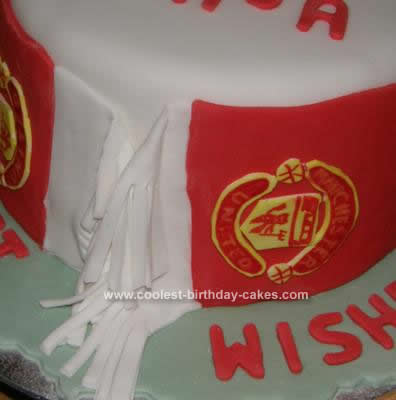