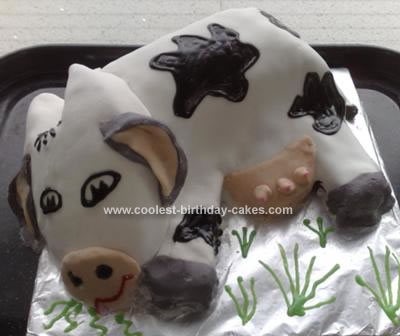 This homemade cow cake was for my sons 3rd Birthday party. I made two sponge cakes, one in an 8″ circular tin the other in a 10″ square. The recipe for the sponge was equal weight of egg to flour to butter to sugar with a pinch of bicarb and drop of vanilla essence. I used 6 large eggs.

I bought some easy roll icing and a whole host of different coloured food colourings. After a little bit of experimentation, I got the udder, nose and inner ears colour from a tiny drop of pink and an even smaller drop of green mixed in the easy roll icing.

The black was very tricky, and I nearly gave up and went for a gray or brown. The gray for the feet and ears was from all the experimenting with trying to get black. I covered the whole cake shape in jam, then covered in the icing.

I had bought a tube of black icing but nowhere near enough to do the entire cake, so I did the outlines and then with a paint brush mixed some neat black food colouring with the black icing and lightly painted on the patches.

It tasted far better than I expected and the kids all enjoyed choosing a body part to eat.