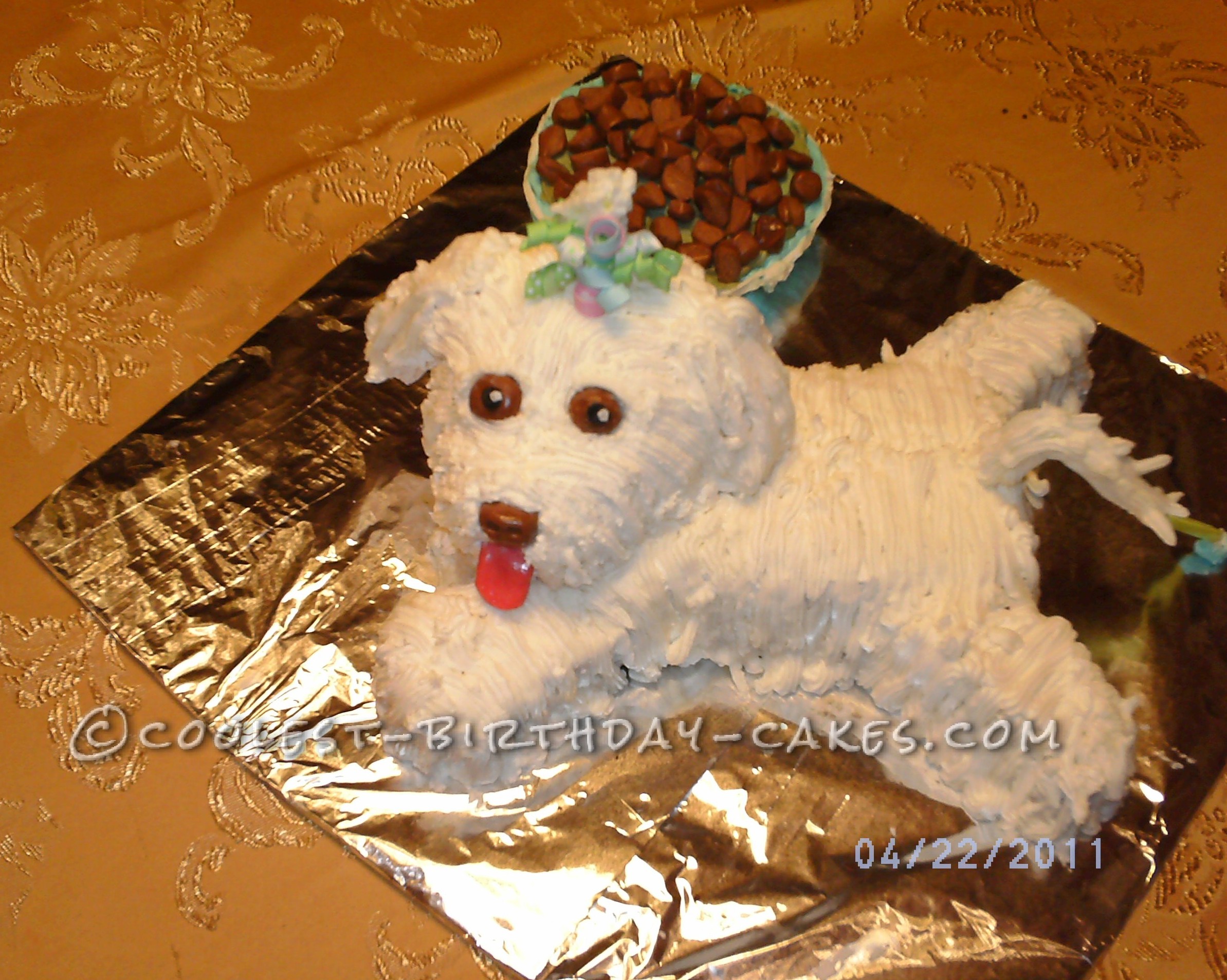 Love at first sight!  That is how I describe the feeling when I first laid eyes on our little Mashi, Tillie. Those big, black eyes against her white cotton pelt were just heart melting.  This was no dog, she became our baby. As her first birthday was approaching, I knew we had to have a party for her. And not just any party, it had to be a dog party…and not just any dog, it had to be a “Tillie” party.  I knew I had a big job ahead of me.

The first thing I made was a piñata that resembled our little Malshi, then I planned the menu.  We had PUPeroni rolls, fettuccini ARFredo, yepper PAWpers, and PUPcakes.  Next was the cake.  I wanted it to look like our little, birthday dog, Tillie, with white, fluffy fur and big, black eyes.

I began the process be sculpting the head and ears using crispy marshmallow mix. The body and legs were cakes baked in a meatloaf pan. I cut one of the cakes into the shape of legs and placed them next to the body. I added the head on the body and began to frost using the frosting tip used for making grass. Once the entire cake was iced, I molded softened colored mini tootsie rolls and sculpted the eyes, nose and tongue. The tail was made with a bendable straw that I covered with icing and let the icing drip over the sides to create a tail that resembled Tillie’s long haired tail. I used another straw that I cut for her hair on top and iced it to resemble her pony tail on the top of her head. I used a new bow and attached it to the straw. Her dog food bowl was made from cake that I baked in a small glass dish. I iced it blue and got some mini brown tootsie rolls and cut them in half to resemble dog food.

Well, I have to say, I was pretty happy with the outcome since this was my first “dog” cake but the ultimate compliment was when I picked up Tillie to show her the cake and she GROWLED at it!!!   No better compliment than that! 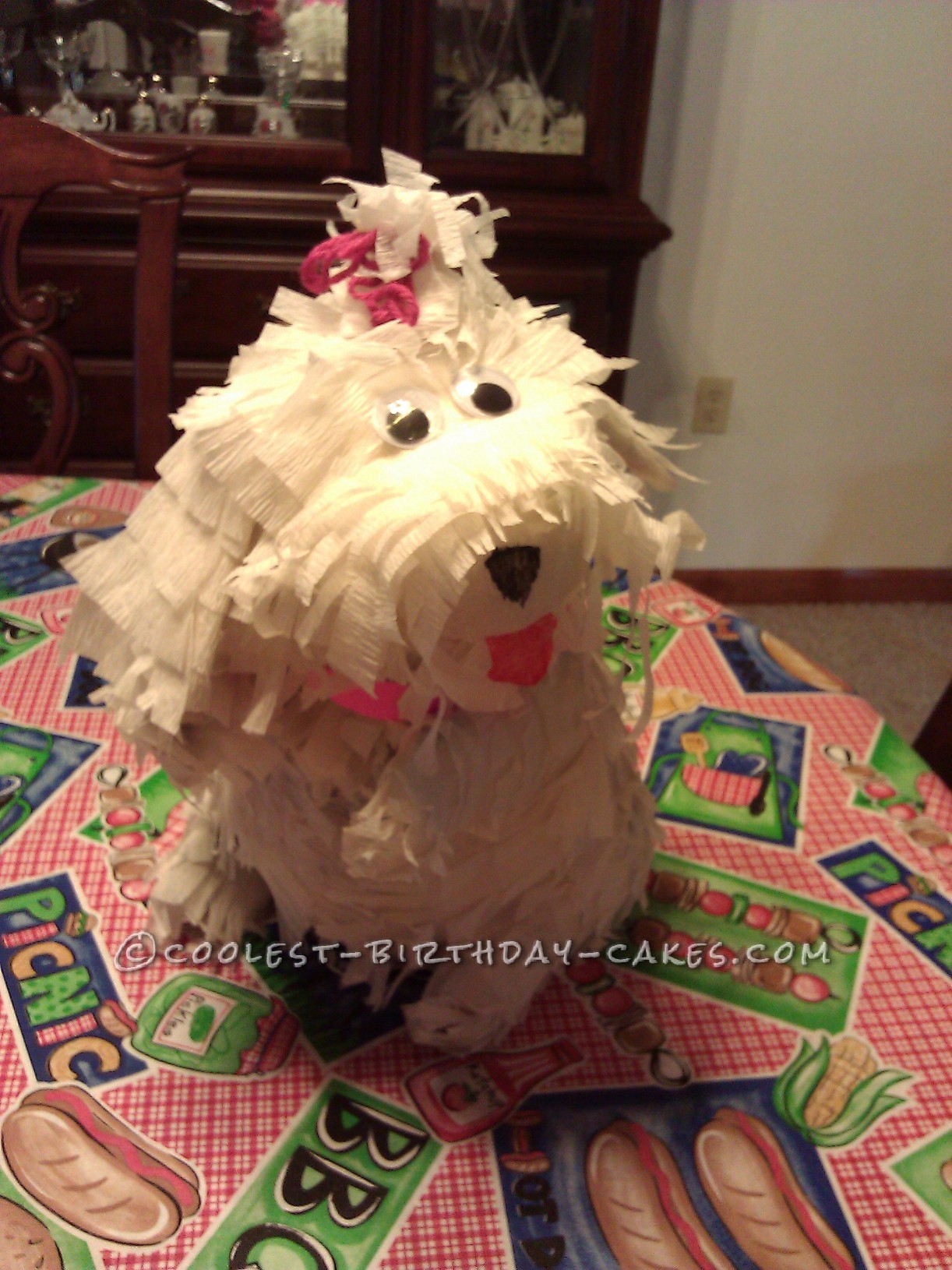 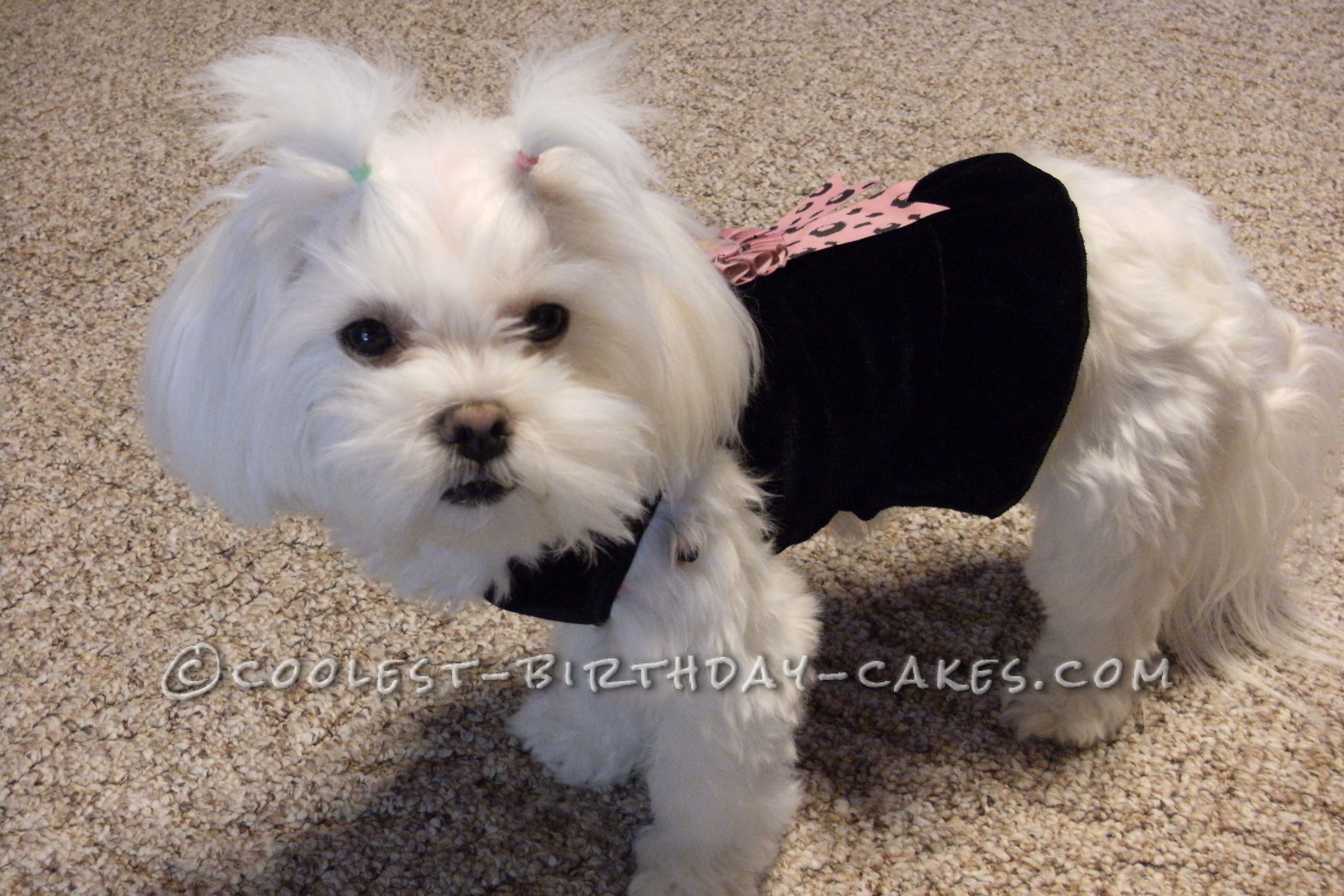 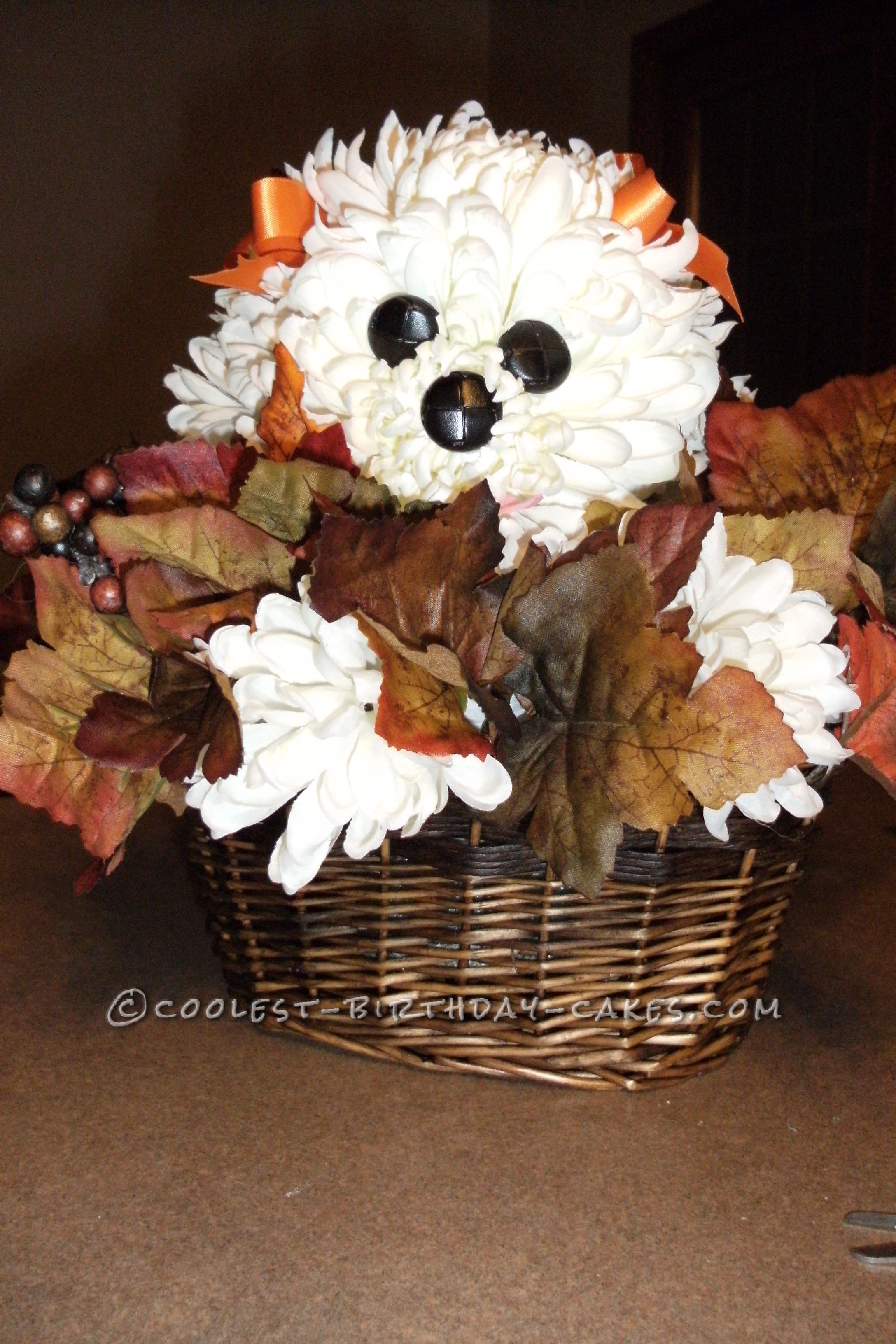 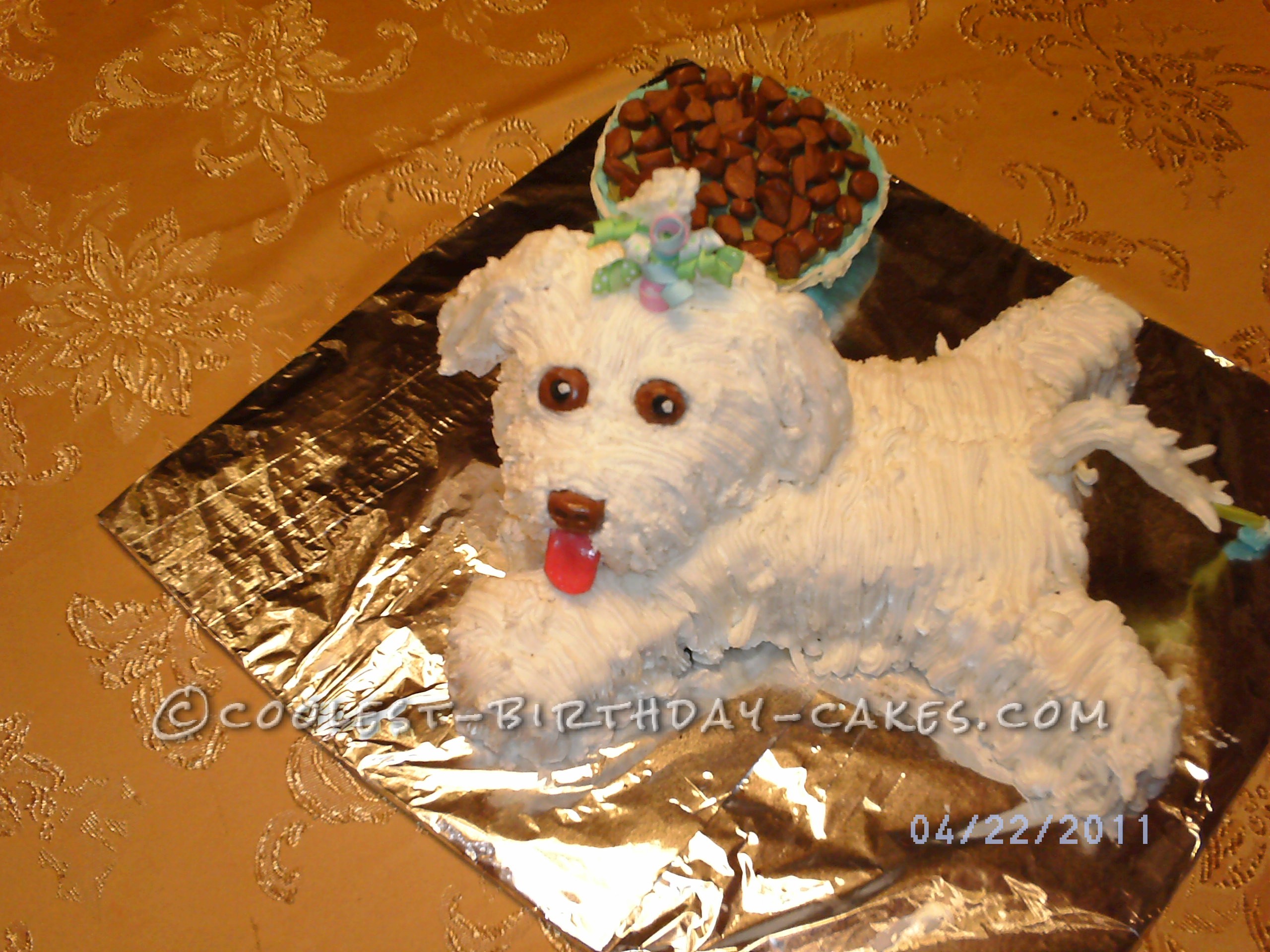 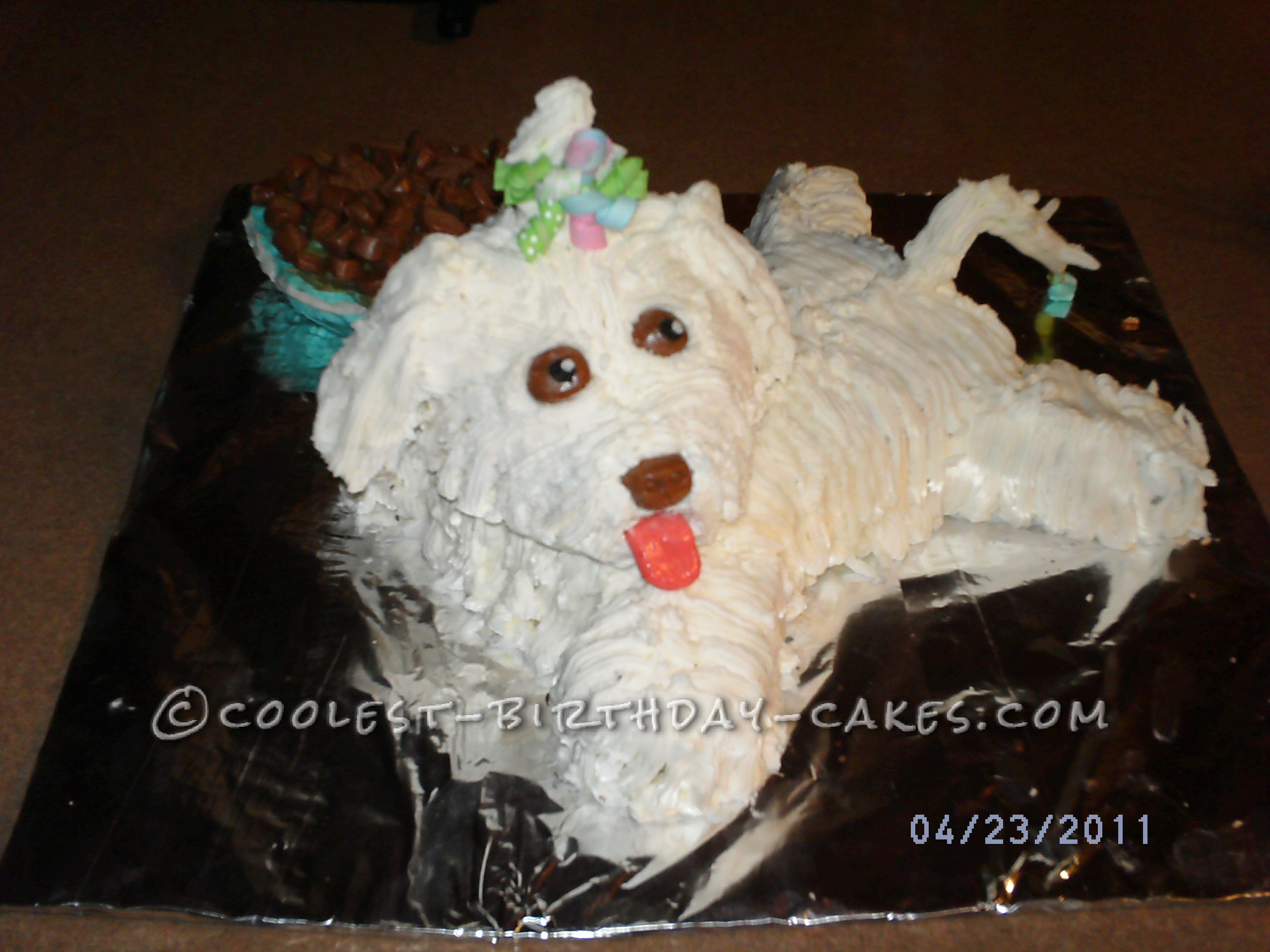