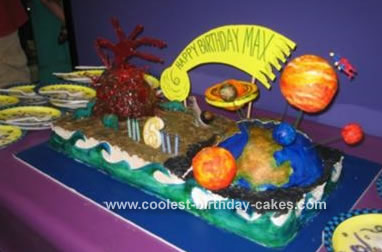 My son, Max, was turning six and wanted an “imagination” party. He wanted the cake to reflect all the things he was passionate about, so he asked for the Earth, all the planets, dinosaurs, a volcano, and Superman!

So, here it is! The Earth cake is made from a half round cake and covered in homemade rolled fondant. More fondant was used for the continents and then hand painted to look like the Earth as viewed from space.

The planets were foam covered in fondant and hand painted. A small plastic Superman was “flying” around Jupiter. The volcano is made from chocolate cake sculpted in a cone shape. It’s frosted with chocolate icing that I melted and combined with chocolate cookie crumbs and then poured over the cake. The exploding “lava” is red hard candy melted and molded into explosions and stuck all over the side of the cake and coming out the top.

The sides of the cake were rolled fondant cut into long waves and hand painted. I made a comet out of cardboard and wrote Happy Birthday Max” on it, as the icing on the top of the cake would not allow written icing to be seen well.