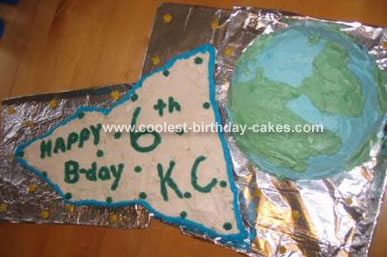 My son wanted a rocket birthday cake this year. After doing a bit of exploring, I came up with the idea to make an additional cake of the earth that the rocket could be shooting off from.

For the earth, I used a basic chocolate cake recipe and baked it in a metal mixing bowl so it would be rounded. I made a whipped cream frosting, and the fluffiness made it really easy to work with. I looked at an earth ball we had to get a general idea of the shapes of the continents, but the fluffy frosting made it more abstract.

For the rocket, I used a basic yellow cake recipe and baked it in a 9 x 13 pan. I used the someone’s idea from this website to cut it in half across the width and move one of the pieces above the other. Then I cut two triangles from the top middle to the sides and moved those triangles to the bottom. I frosted this one with a basic buttercream.

I had to lay them across two flat cookie sheets which I covered with foil and dabbed small frosting stars on.

This isn’t shown, but we lined the candles along the bottom of the rocket, as if it were shooting off.