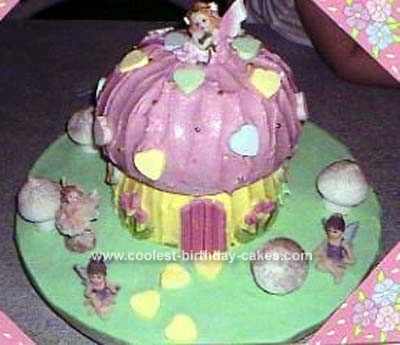 This fairy’s house cake was made for my daughter’s 3rd birthday. She had a fairy and wizards party. The cake is simple but looks amazing when completed.

I made two bowl cakes (one is slightly smaller than the other). The cakes are Madeira sponges.

I covered a cake board with fondant that I tinted green. I cut out a circle in the fondant for the bottom cake (the larger one) to sit. I covered it in yellow buttercream (using paste for a vibrant yellow).

I put the top cake on a piece of pink cardboard and sat it on top. I iced it using pink buttercream and made indents with the spatula for the roof. I used some musk sticks, cut and shaped as a door. Spearmint leaves and trimmed musk sticks were used as flowers on the wall of the lower cake. I used candy hearts for windows and all over the roof with some coloured couchous (edible balls).

I also used candy hearts as a path leading to the door and some mushrooms as toadstools which I dusted with a little cocoa powder.

I place fairy figurines that I picked up from some dollar stores to decorate and as a keepsake.