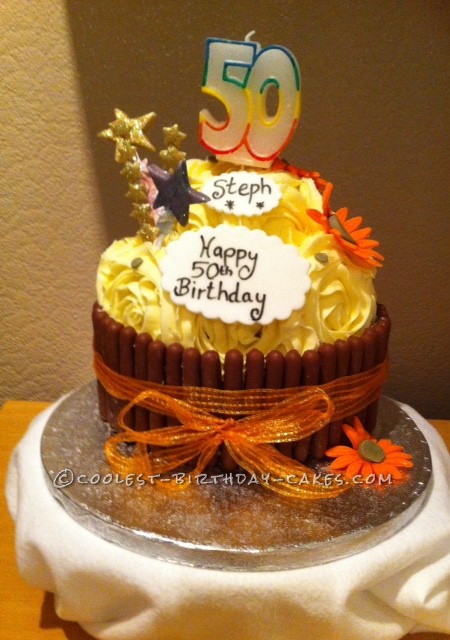 My sister was 50 on November 5th. Well I just had to make her a surprise cake (she hates surprises). I started by making 3 orange flowers to decorate the cake with later. I also made some stars attached to wires and when these were hard I colored them with glitter. These were to resemble the fireworks to coincide with November the 5th bonfire night.

I then made two plaques to write a message onto when they have hardened. I made the giant cupcake using a chocolate  cake recipe I have. When this was cold I filled with orange flavored butter cream and then covered with a thin layer of butter cream and chilled before I started to decorate.

I fetched the cake out of the freezer and spread a layer of butter cream bit by bit around the bottom of the cake attaching chocolate fingers until the base was completed. I now pipe iced swirls to the top of the cake and attached two of the flowers I made earlier to the cake and the last one to the cake board.

I bought some orange ribbon with a glitter thread through it and tied this around the chocolate fingers. The two plaques have now hardened so I wrote a message on one and my sister’s name on the other with an edible ink pen and attached these to the front of the cake.

Using a posy pick to place the wires  off the fireworks into (because I don’t like pushing the wires into the cake) I positioned the fireworks onto the cake. Finally the big 50 candle. Well, I had to ask her son to collect the cake as her son’s daughter and their family’s were all going out for a meal to celebrate. What a surprise she had she was soo embarrassed but loved it