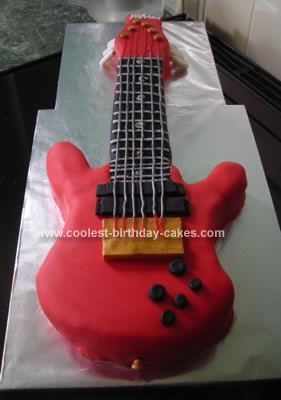 I decided to make a replica of a friend’s bass guitar (John Patitucci’s signature bass for reference) for his birthday, and wanted to get it as accurate as possible. After taking loads of photos of a Guitar Birthday Cake I set to work baking 2 very large rectangular chocolate sponges.

I cut the sponges very carefully into shape, pieces I cut off were used elsewhere on the cake (nothing was left spare) and eventually I had my guitar shape. I covered with chocolate frosting and began using my sugarpaste.

The head and base of the guitar were covered in bright red, and the neck covered in black. I then carved fret line into the black and filled with a little white icing, when this dried I painted the lines with silver edible paint.

I hand moulded the 6 pegs and 6 screws and the two strap pins out of white sugarpaste and the 5 switches out of black sugarpaste. I also cut strips of leftover sugarpaste to make the pickups and bridge. I then painted the screws, strap pins and bridge in gold edible paint. I also glued down the black pickups to the base of the guitar.

I painted strawberry laces with silver edible paint for the strings.

I made holes in the side of the head for the keys and placed them in to use as markers for the end of my strings. I then stuck down the bottom piece of the bridge with edible glue and placed along the fret board, trimming the ends. I glued the pegs and the top piece of the bridge on top of the strings to hold them in place and pull them tight so that they were raised above the fretboard as on a real guitar.

I then glued down my switches and strap pins and painted Yamaha on the head to finish.