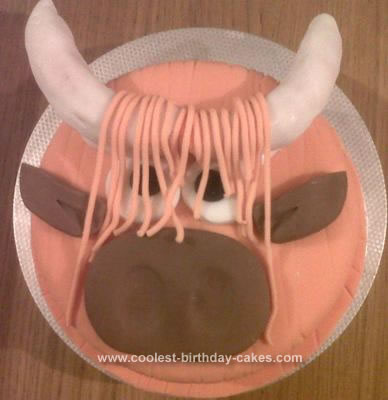 This was originally a ‘joke’ request from a friend that turned in to being my first ‘commissioned’ cake. Since I’m not terribly artistic I took inspiration from a modelling clay badge I saw online.

The base of the cake is 2 8″ sponges sandwiched together with butter cream and stuck to a 9″ board. I then covered the cake and the board with some fondant icing that I had colored with apricot coloring (the silver you can see is the turntable it was sat on). Using a roller tool and a modelling stick I put a series of lines over the cake to simulate the fur. Keep the lines roughly vertical and not criss-crossing all over each other. The eyes were cut using circle cutters out of white and black fondant. The nose and ears were made out of brown fondant. The nose was a roughly oval shape + then I used my thumb to make two indents for the nostrils. The ears were made sort of triangular in shape and then a modelling tool was pushed in to them at the bottom to give them a bit more of a 3D effect.

Next I got to play with some rice crispie treats. It was the first time I’d made them and played with them and I have to say they were really easy to deal with. For those who haven’t used them before then basically melt some marshmallows in a saucepan and pour in a pile of ‘puffed rice’ – I went with the cheapest I could find! Mix thoroughly and wait for it to cool a bit so that you don’t get burnt – don’t wait too long or they’ll set solid and then you’ll have to nuke them in the microwave for a few seconds at a time until they’re soft enough to mold again! Anyway, once I’d got the treats made I molded myself some horns and covered them in white fondant – using a little bit of water to make it stick. I then stuck a couple of cocktail sticks into each horn and then attached them to the cake – it took a number of attempts to get something I was happy with! Once they were firmly attached I then used an extruder with a single round hole disk in it + extruded various lengths which I attached over the horns to hide the join + form the ‘hair’ on the cow.

I’m happy to say my friend and her sister (for who the cake was a surprise) were both really pleased with it.