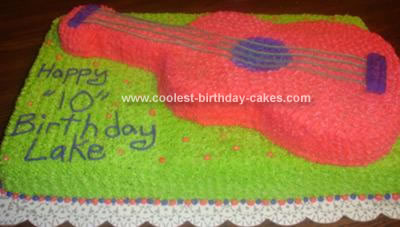 I made this Guitar cake for a friend’s daughter who was turning ten. She was having a “diva dress-up music party” and wanted a guitar cake.

I started with a large 18″ x 12″ sheet cake pan and filled it with two cake mixes. I then made two more cakes using a guitar-shaped pan and a loaf pan that was 12″ long. I evened the sheet cake out, then used the loaf pan cake to add some extra length to the side of it so the guitar would fit on it.

I then placed the guitar on the pieced-together sheet cake at an angle, so I would have some room to write. She was sure she wanted a lime green color as the base, so I suggested using bright pink and purple for the guitar and the accents. I started by piping the whole cake with lime green icing and the guitar with very bright pink. I used the purple icing for the hole in the center and to write with. I then dropped small dots of alternating colors around the base for extra color.

For the strings, I found some long, flat candy called sour powers and cut them into strips. I pieced two together lengthwise for each string, so that they would fit the length of the guitar. I pushed them down on both ends with a toothpick and glued them in place, using pink icing to match the guitar. I then used purple icing to cover the two ends of the final string lengths.

I then placed pink nerds all over the cake for extra color and decoration. She loved the cake and I have also made it in purple for a Hannah Montana party, which came out really well.