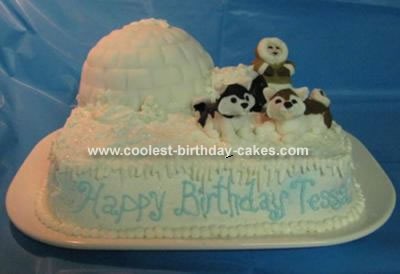 When my 3 daughters had a combined Alaska themed birthday party, my 5 year old wanted huskies on her Igloo cake, as they are her favorite dog!

I made a box cake mix and made my own buttercream icing. I baked the cake in a rectangular pan that I have which is about 10 x 8. I also baked a cake in one of my small cereal bowls to use for the igloo, and 1 regular size cupcake.

I used a butter knife to press the lines on the igloo, and placed it on the cake. Then, I took a cupcake and cut it down the middle, and laying it on its side, I put buttercream on it, then fondant, and lined it, too, for the doorway. I rolled out some black fondant, and cut it into a half circle, and put it on the front of the “doorway”.

I had sculpted the huskies and the Eskimo with fondant the night before, and placed them on the cake. I piped snowballs near the igloo, and a little on top to make it look like it was snowed on. I piped the icicle border around, and then the snowball one along the bottom. Finally, I sprinkled the whole cake with edible glitter.