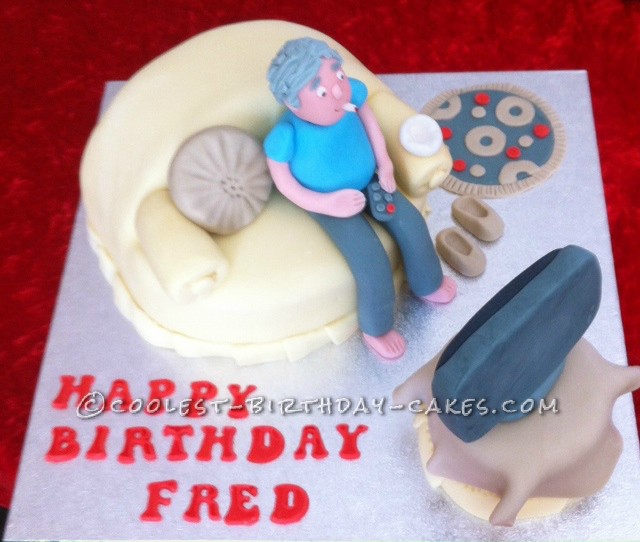 My friend asked me to make a sofa cake for her relative’s birthday. I started by baking a 8″ vanilla sponge cake. When this was cold, I filled it with buttercream. They didn’t want any jam, Then, I sandwiched them together.

Next, I cut off a third of the cake and stood the larger part of the cake on its end as the back of the sofa and placed the smaller piece as the seat to the sofa. I then covered the whole cake in buttercream and placed it in the freezer to chill.

When the cake was chilled I covered it in a beige fondant icing. I used some of the offcuts of beige icing to make the arms to the sofa and attached these using a little water. Then, I made an edging for the base of the sofa in the same coloured icing by cutting out small strips attaching them one at a time and overlapping them as I attached them to the cake.

Next, I cut out two circle cakes for the table, buttercreamed them together, covered them in buttercream and chilled them. Once chilled, I covered this in beige icing and then made a table cloth to cover the table in a light brown. These were set aside to harden slightly for a couple of hours.

I coloured some icing 1/2 fondant and 1/2 flower paste in black, enough to make the tv and then I shaped the tv screen. I added a little white to some of the black icing to make the back of the tv and the tv stand in grey and set them aside to harden.

To make this Sofa cake, I made the rug in a blue colour and I edged it with a beige frill and then cut out beige and red circles for a design on the rug.

Then, it was time to make the man.

I made the legs in a denim blue colour by making a long sausage shape and cutting to size and attached them to the cake using a little water. I then made the t-shirt in a bright blue and the arms, feet and head in a skin colour. I made the man’s hair grey and then attached some eyes and eyebrows. I made a cigarette and attached it in the mans mouth and a remote control for the tv which I attached in the man’s hand. I completed the man by adding some slippers and an ashtray. I also made a cushion for the sofa.

Finally, I did the wording which was attached to the cake board and I attached the tv to the table using some royal icing.

They really loved this cake and so did I. 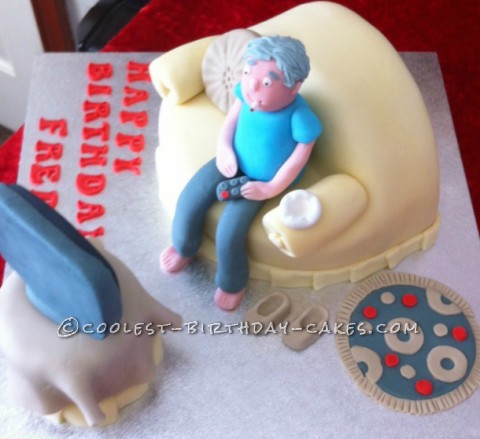 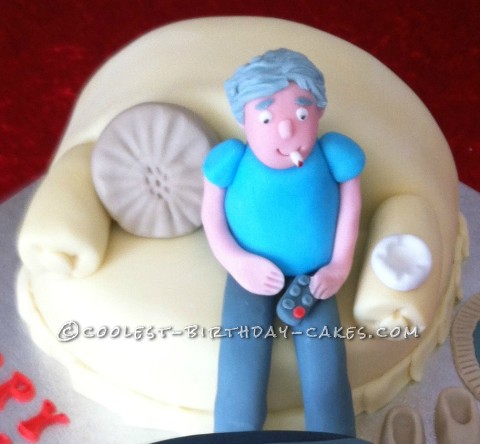