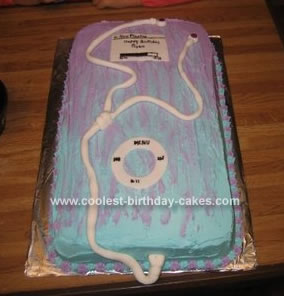 I made this iPod Cake for one of my niece’s birthdays. She was turning 11 and totally into music, so I thought an Ipod would be perfect. I also used her favorite colors on the cake.

I used several ideas off of this site combined to make this awesome cake for her.

I started with two 9X13 cakes, and cut one in half to end up with a 9X15 total finished cake size. I made homemade buttercream icing since I was going to need a lot to complete this cake. I tinted most of it turquoise and also tinted some light purple. I iced the whole cake in the turquoise icing and then used the light purple on the top only. I used an offset spatula to drag the purple down into the turquoise to give it a marbling effect. I also used white fondant and made the ear phones and connections.

I cut a round piece and a rectangle piece for the menu and display. I cut out the center of the menu circle so that it would have more dimension. I then used color writers by Wilton to write on the fondant. These are special markers for fondant. You have to write gently so that the colors won’t run and the fondant won’t dissolve. I placed the menu selector near the bottom, and the now playing screen near the top. On the now playing screen, I wrote Happy Birthday and her name for the song playing, and made a progress bar as well.

I finished the cake with an alternating star bottom in both colors. This cake was very heavy once it was all assembled. I used three cake boards taped together to support the weight. My niece loved it and so did all her friends.