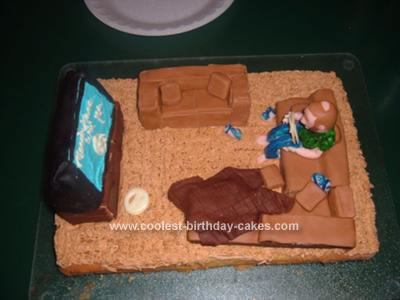 This Man on Couch Cake was for my husband’s birthday. It is him sitting on the couch in our living room playing “Mario Kart Wii.” I made two rectangle cakes, one for the base and one for cutting into the various pieces. I cut a couple of rectangles for the couches. I basically formed all the furniture out of cake, using a knife.

I covered the furniture with frosting and then fondant. I used toothpicks for support, so the furniture wouldn’t fall over. My husband himself is made of just fondant, that I shaped by hand and then painted with food coloring and a small paint brush. I filled in the TV screen with blue frosting and wrote on it with white.

I made the “Mario Kart wheels” out of white chocolate. I melted the chocolate and then put it into a piping bag. I piped four wheel shapes onto waxed paper and them put them into the freezer to harden. After they were hard I glued the two sides together with more chocolate. I made two wheels. One for the floor and one for him to hold. I got it to stay in his hands by putting a little dot of chocolate and holding it until it hardened.

The carpet was made with a multi-holed decorating tip. The pillows are squares of fondant. The crushed beer cans are fondant that I shaped and painted with food coloring, and the blanket is fondant that I cut and used a knife to carve the design into. This was time consuming but everyone thought it was hilarious.