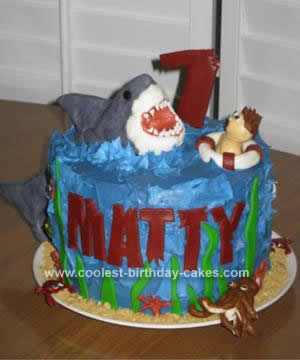 For my son’s 7th birthday, he asked me to make his cake “a guy swimming in the ocean about to be eaten by a shark”. I began by making a 3-layer 8″ chocolate cake. I put a wooden dowel down the center of it to stabilize it and crumb-coated the cake. I had made some marshmallow fondant a few days earlier and started making the decorations out of it as I let the crumb coat on my cake set up. I cut out the letters for his name and the number 7 and then cut some parts off of them to make it look like the shark had taken some bites.

I made some fish, eels, crabs, an octopus and sea grass. Then I used buttercream to frost the cake in 2 shades of blue to make it look like water. Next, I made a small batch of rice crispy treats and molded it into the shape of the shark’s head and tale. I smashed the rice crispy treats together so they would be really dense and hold the shape well. I covered them with buttercream and then added the marshmallow fondant. Then I made the guy out of marshmallow fondant as well. Once the decorations were all made, I started adding them to the cake. I stuck the shark’s head on top and then used a Popsicle stick to attach the shark’s tale to the side of the cake.

The rest of the decorations stuck to the soft buttercream really easily. When my son first saw my Homemade Shark Birthday Cake Idea the morning of his birthday he said “that is the most awesome cake ever!!!”, which made all the work worth it. 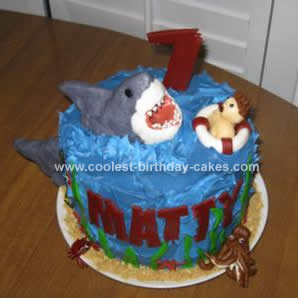 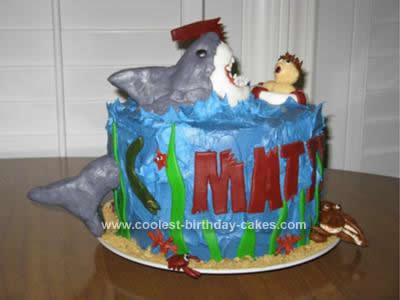