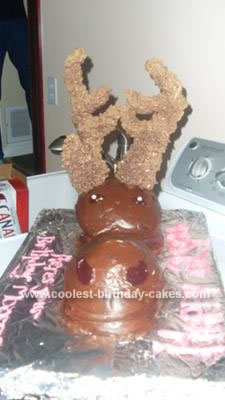 Here is how I made this coolest Moose cake.

For the antlers and ears, I made a rice crispie mix with melted chocolate; I sculpted them and froze them. I also put long skewer toothpicks in them, as well as smaller toothpicks in the antler branches, for support. I don’t think rice crispies work very well; they ended up melting about five minutes after they were on the moose. It would be better to find a caramel recipe or something similar which hardens. Licorice with toothpicks might work.

Moose Cake for The Mighty Hunter