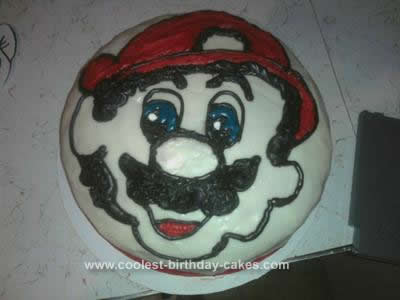 As a present for one of my son’s friend’s 7th birthday (Nintendo themed) I created a 2 layer 9×9 round cake with Mario’s face and two dozen “extra life” toad stool cupcakes. I used Pillsbury funfetti cake mixes, my own homemade buttercream frosting recipe for the white, blue, and green, store bought red and black tube frosting, and small marshmallows. I frosted(and stacked) each layer of the round cake with white and the cupcakes with green.

For Mario’s face I looked off one of my old Nintendo games (to the right on the counter, Super Mario Bros. 3). I outlined very slowly in black frosting to create a sort of coloring page of Mario’s face. I just eye-balled it. (If you can’t draw, I bet you could find a picture online, print it, trace it on wax paper with a Sharpie, lay it on the cake, stab holes with toothpicks through the wax paper design, lift off the wax paper leaving the toothpicks to create a connect-the-dots for your outline.)Sometimes black store bought frosting is really thick so I microwave it for 10 seconds in a bowl and put it into a frosting squirter with a very tiny tip to get a thinner line. I filled in the colored areas as needed. Make sure to keep your colored frosting away from the black lines, I like to drag a tooth pick in swirls to scoot the color frosting as close as possible to the black outline. For the cupcakes I first frosted cupcakes with green, then I cut the tops off of several small marshmallows. I sat about 5 marshmallow tops on each sticky side down. I contemplated using white fondant or Mentos candies for the white spots, but wanted a cheaper, quicker, easier method. You could also do the cupcakes in red frosting because the game has red toadstools as well.

Gavin was so excited to see his Nintendo Cake present and “eat an extra life”. 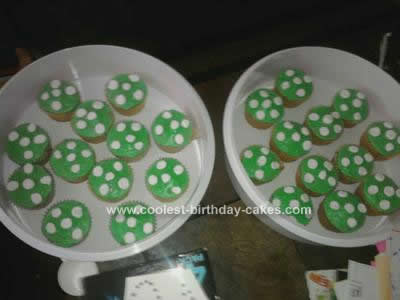