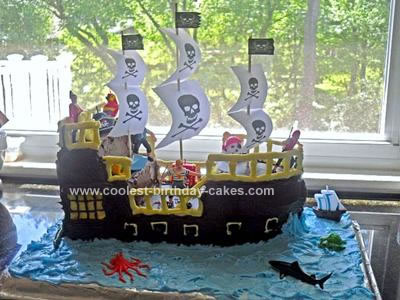 I made this homemade pirate ship cake for my grandson’s 3rd birthday. I baked two 13″x9″ rectangles, and cut the pieces I needed to build up the shape of the ship with a curved raised deck at the front, and a two-level deck at the rear. Then I covered it in chocolate icing. I did have a bit of poop-deck-slippage (!) and the back began to lean backwards, so I lifted up the back end of the boat and slid in a wedge of cake underneath, then frosted it over and from then on it was just fine.

The rails, windows, portholes, and steering wheel were made from royal icing and allowed to dry hard before I put them on the boat, and the cannons were licorice. For sails and flags, I printed the skull and crossbones design from the internet, cut the sails to shape, and slipped them onto kebab sticks. With some plastic pirates and ocean animals, and pirate candles, it was a great success!