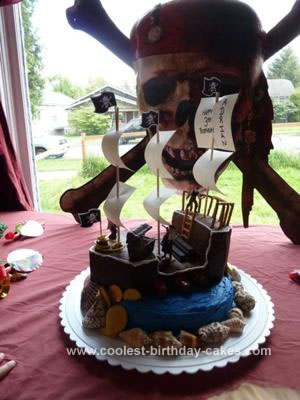 My 3 year old son wanted nothing more than a Pirate Birthday party. Being a total and complete cake baking novice, I was terrified. As tradition dictated, I immediately launched myself onto the coolest-birthday-cakes website in hope of inspiration and assurance. Success.

I found several amazing cakes (and amazing behind-the-scene mom’s) and finally decided that I was going to attempt a ship. In the end… this was by far the most awesome cake I ever made. It fed the entire party and there were leftovers.

I used Duncan Hine’s Red Velvet cake mix and ‘densed’ the mix, as so many of the recipes stated that there was a common problem of the cake crumbling during the stacking or frosting phases. I made a 10in. round lemon cake, and a 14×10 rectangle red velvet cake. The round cake became the ‘ocean’ with the ship atop.

For the ship I used the 14×10 flat cake. I cut out a basic milk carton design. Then cut about 4in’s off the back of the cake so I would have pieces for stacking and making height. I used frosting to glue the pieces together.

Accessories included Rolo’s for cannon balls, mini-tootsie rolls for the cannon’s, pretzel sticks for the raining and ladder. Kit Kat’s for steps and licorice ‘whip’ for the yellow rope. The ‘windows’ on the back of the ship are the nutterbutter rounds. The figures were taken from my son’s room unbeknownst to him in the middle of the night. Mast’s were made using three large skewers from the meat section of the grocery store, and the mast’s are simply white construction paper. I had some pirate cupcake papers and toothpicks already with the jolly roger emblem, so I used the toothpicks with flags and taped them to the top of the mast poles.

I surrounded the entire cake with a bag of assorted shells that I got at Michael’s Arts and Crafts for about $3.00. I actually ended up using one of the larger shells to help hold my ship up because the ship was slightly longer than me ‘ocean.’ Worked great and looked intentional. *grin* Which it was not.

You can do it! 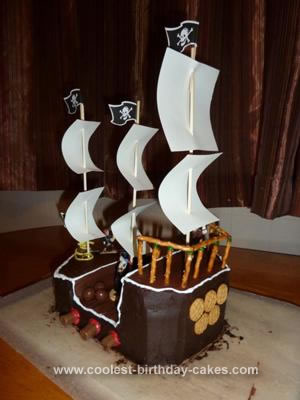 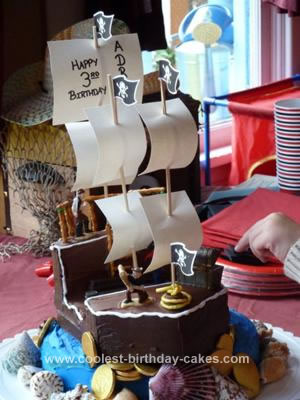 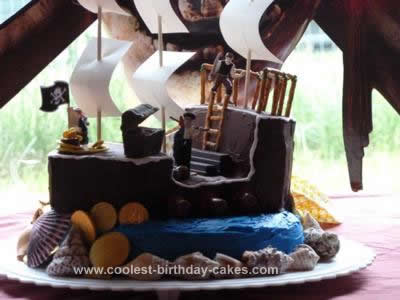