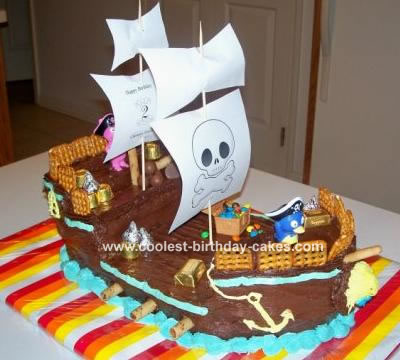 After a lot of online research (including this website), I made this Pirate Ship cake for my son’s second birthday.

Using two boxed marble cake mixes, which I converted to pound cake consistency by adding four eggs, 1 cup of water, 1/2 cup oil and a box of pudding mix to each, I made two 9×13 cakes, which I froze overnight.

To make the ship shape, I cut a 3″ section off of the end of one cake and added it to the end of the base cake, to make a 9×16 base. The remainder of the second cake was then cut into three sections: two 4″ and one 2″. I stacked the 4″ sections on each end of the base cake to make an elevated bow and stern, and then stacked the 2″ section onto the end of the stern, for a more elevated “poop deck,” securing it with a couple of skewers that went through all 3 layers. (This later turned out to be a mistake!)

I rounded off the bow quite a bit, the stern less so, carved a “step” into my poop deck layer, and frosted the whole cake with store bought chocolate fudge frosting, carving “planks” by making short, horizontal strokes with my spatula. I used pretzel squares for the railing, drew on an anchor and windows with yellow frosting, and added various stacks of “treasure”: Hershey gold bars, Rollos, and silver Hershey kiss “money bags.”

I took the 2 figurines and plastic treasure chest from my son’s Backyardigans bath toy, and placed them on as well, filling the treasure chest with mini M&M “jewels.” A bowsprit and steering wheel post were made from cookie sticks.

For side cannons, I used Pepperidge Farm Pirouette cookies. I also used a half of a Pirouette cookie, balanced on two sideways, unwrapped Rollos, to make a portable canon, which I placed on the aft deck. Sails were made from paper and skewers.

My favorite part was the “mermaid” I attached to the bow with a skewer: it’s a marshmallow peep with frosting “hair” and a frosting-and-M&M bikini top!

I was well pleased with the result, until I woke up the next morning to find that my overloaded “poop deck” had completely collapsed! Thank goodness, some of the fine cooks on this site had run into other problems with ship construction, and I had read about their clever solution: fashioning a “sea monster” to attack the ship, making the breakage look intentional! Google to the rescue! I whipped up some quick marshmallow fondant, used it to add “tentacles” to a funny-looking fish toy, and draped it artistically over the mess. Problem solved, and the cake never looked better!

The cake easily served 25+ guests with generous pieces, and even the fondant was pronounced delicious!