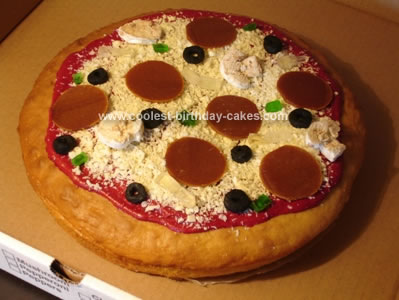 This pizza cake (for my pizza-craving husband’s birthday) was inspired by others on this site- thanks!

1. ‘Crust’ = white cake (from the box) baked in a large round pan. I didn’t have a 12-inch cake pan, so I used a large aluminum pie plate, bent the sides so they were straight, and lined the pan with foil and sprayed. I moved it to the top rack for the final few minutes so it would brown.

3. ‘Cheese’ = white chocolate bar. Grated with a cheese grater. Melted on to the frosted cake with a blowdryer on low. When flakes started to blow around, I would pull the dryer back and at an angle so flakes are blown toward the center of the cake.

4. ‘Black olives’ = black decorating frosting. I squeezed lines of frosting onto foil, cooled in the fridge for about 10 minutes, then shaped them into rings with a knife and refrigerated them again.

6. ‘Mushrooms’ = marshmallows. I sliced large marshmallows with a buttered knife, then carved 2 slices to form each mushroom. I made a mixture of cocoa powder and water and spread it thinly, enough to settle in the holes and grooves.

7. ‘Green peppers’ = green gummy bears. I sliced the gummy bears to make small squares. I also spread green decorating frosting on one side to help them stick to the cake and look less transparent.

8. ‘Onions’ = white gummy bears. I sliced them lengthwise and laid 2 together on a plate, then warmed them in the microwave for 5 seconds so they would stick together and let them cool in the fridge.

9. ‘Pepperoni’ = apricot fruit leather (similar to a fruit roll-up but sold in strips). Cut out cookie-cutter-style with the mouth of a small jar.

Note: I made the crust, olives, & mushrooms a couple of days in advance, froze the cake and refrigerated the toppings. This helped break up the task, and the sticky items were easier to work with after they had dried.