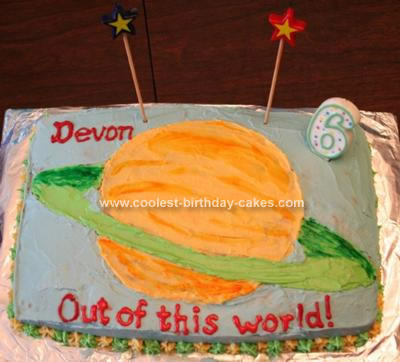 I made this Saturn cake for my son’s 6th birthday for his space-themed party. It’s very simple. I printed a picture of Saturn from the internet, blew it up so the circle planet itself was about 7 inches in diameter. The rings were too big to print all on the page but I was able to guesstimate the missing sides of the rings.

Then I cut out the circle separate from the rings. I placed the circle and rings on the un-iced cake and iced with blue the whole cake except for the planet, leaving the paper on the cake while I did it so that I didn’t cross the line. (I was stupid and just used store-bought pre-made icing, so I didn’t have enough, thus I iced too thin, you can even see the cake through it in spots).

Then I took the circle paper off but left the ring paper on and iced the circle planet yellow. To try to give it a little depth, I then took straight yellow food coloring on the edge of a knife and spread the color around directly on top of the icing to make atmospheric streaks. Then I removed the paper rings and iced them green. Then, like I did with the yellow, I took straight green food coloring to make the back of the rings darker.

I used a store bought tube of red icing to do the writing. Then a few hours later my 2 yr old got to the cake when no one was looking and completely messed up the whole bottom line of words except for the first O and the ending ld! (Yes, I was crying!) Since I wasn’t home, my wonderful mother came over and re-iced over it in blue (thank goodness we hadn’t thrown the extra away!) and then I redid the words. The red tube must have been warmer or something by this point because the letters didn’t quite look exactly the same, but I guess I was the only one who cared.

I feel the finished product looked pretty sloppy, but it was impressive enough for 6 year olds. I rush too much, I did all this in about 1 hour. I think I learned the difference between decorating with store bought buttercream frosting vs. decorator’s icing. I will never use premade store icing again. I really need to learn how to use fondant, that’s my next project!