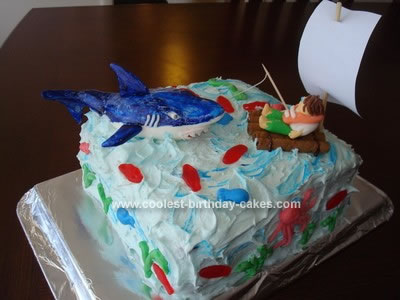 My son loves sharks, so I browsed the shark cakes on this site and got my inspiration. I also looked at the pirate ship cakes and combined two ideas I liked. The boy on the raft is meant to be my son. My son insisted on seeing all of the shark’s body. I made the shark, boy, and some of the sea creatures out of homemade marshmallow fondant. I made these several days in advance, so they had time to dry. I made the fins of the shark separate from the body attached them with toothpicks cut in half after they had firmed up. I painted the shark using gel food coloring. It never fully dried and was kind of messy. I would probably try something different next time. The fondant for the boy was tinted using gel food coloring. His hair was made from Tootsie Roll candy, which I melted on a plate in the microwave for about 8 seconds then shaped into the strands of hair. The raft is made from Piruoette wafer sticks (the small version). I put about 2 T. chocolate chips with a little bit of shortening in a Ziploc baggie in the microwave for about 30 seconds to melt the chips. I kneaded the mixture for a bit, then cut a very small hole in one of the corners of the bag. I squeezed the chocolate onto the raft to make it look like rope. I used a skewer for the mast and paper for the sail. (The candles were placed far away from the paper for obvious reasons.) I used a toothpick with string attached to it for a fishing pole. The cake itself is just two 9×9 inch cakes stacked with a layer of frosting in between. I iced them with buttercream frosting tinted light blue. I then put dots of full-strength blue food coloring on the cake and swirled it around to make a few areas of darker blue. I liked the effect a lot. We also used some Swedish fish on the cake which my son put on himself. Overall, the cake was fairly simple to make other than making the shark look right. My son was thrilled with the result.