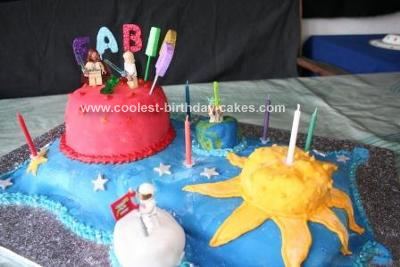 For this planets cake I baked two square chocolate cakes in 8 inch tins and laid them side by side on the cake board. I covered them with blue fondant icing in a marbled effect achieved by mixing dark blue and light blue packs. The fondant icing was stuck to the cake with a thin layer of butter cream. I let the blue sky overlap onto the board and cut it to make a swirly edge which was neatened by piped blue butter cream.

I decided to have a red planet (Mars), the Sun, Earth and Moon as they were all contrasting colours and worked well against the blue sky. The planets were sponges cooked in the microwave in various sized of plastic food bowls, which worked well as it made them nice and round.

The icing was again fondant with little piped details. I cut out yellow and silver stars and yellow sun rays from fondant icing and used some silver balls and glittery edible dust as decoration. The candles, name letters and Lego figures completed the homemade space planets birthday cake.