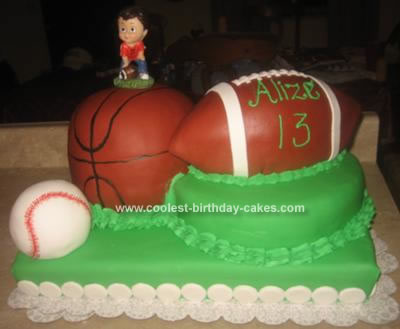 My grandson Alize’ requested a cake for his birthday that would have a football, basketball and a baseball on it as he plays all three sports and he wanted to invite many of his teammates. So I created this Sports Birthday Cake.

I then used a Pyrex 10″ bowl and baked 2 layers of yellow cake, with cheese cake filling and one 10×3″ round layer cake in the middle. I then sculpted the basket ball, frosted then covered with fondant. I used a Rubbermaid shelf liner to create a texture to the football and the basket ball. I drew lines on the basketball with a blunt tipped knife then drew the lines on with a food coloring marker. I put the basket ball on the cake snug against the crescent I had cut out.

I cut white fondant to make the stripes and the lacing on the football. I put the football on the round fondant covered cake sort of leaning against the basketball. I then made a white cake and baked it in a large roundish coffee cup and sculpted it round, then iced and covered in fondant. I drew the stitching on with a food coloring pen. I placed it directly on the sheet cake.

The little statue I got at the store and it is a little football player and I put my grandson’s number “5” on it. He had his party at a pizza parlor and everyone just loved it. People even came by to look at it that wasn’t even in the party.