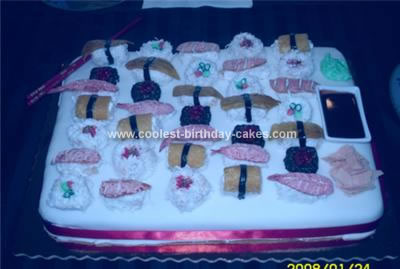 I was attending a Sushi party, so decided to make a sushi cake. I got so many tips and ideas from this web site. Thank-you! (Especially Patty L. Thanks!)

I first baked two cakes in a cookie tray and then sandwiched them together with jam. I then made fondant for the first time and it actually came out pretty well. I made 7 different types of sushi and 5 of each type.

I used Rice Krispy Treats to mold all of them, and then used fondant to cover the ones that needed rice and rolled it in coconut. I used dried mango for the salmon and shrimp. I painted them a pinkish color and scored them and added the white lines. For the shrimp I molded them to have the tails and then with a very small scissors, made little cuts, to make it look feathery.

I then painted the tails darker to look more real. The Californian roll was also made from Rice Krispy Treats molded and rolled with coconut. Then I cut a little bit of a pink starburst to represent the crab, and then fruit roll up and painted the white dots to make it look like cucumber. A tiny bit of frosting colored green for the avocado.

The egg sushi was topped with half a Twinkie, and then I painted a a green fruit roll up black, so that some of the green would show through.

The Wasabi is frosting tinted green and some green sprinkles to give it a more pasty look.

I kept experimenting with the ginger and finally came up with melting white chocolate tinting it a salmony color and then spreading it very thin on parchment paper.

To get the curled effect, while it was still wet I placed pencils under the paper so it would curl while it was drying. Then I cut it and glued it on to the cake using glucose.

The spicy tuna was with rice Krispy, rolled in coconut and then different colored sprinkles added. I would have used chocolate syrup for the soya sauce but I didn’t have any at hand, so improvised by using caramel syrup and dying it brown with food coloring.

To finish I added chopsticks. Everybody seemed to enjoy it at the party!