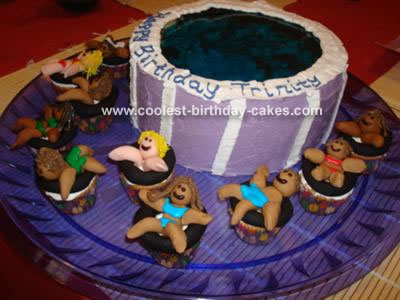 My niece was having a pool party for her sixth birthday and she had two specific requirements: purple and chocolate. I’ve seen the jello pool cake (http://video.aol.com/video-detail/jell-o-swimming-pool-cake/4277762898), so wanted to try my own version of this swimming pool cake.

My original plan was to make a 9×13 cake, but instead had to do a 8 inch 2 layer cake and mini cupcakes. I had to compromise the chocolate request because a few of the kids at the party had food allergies, so I made vanilla peanut/soy/egg free cupcakes, used the extra vanilla mix to make a marble cake top layer and the bottom layer was chocolate.

I iced in between the layers and on the outside edges. I cut into the top layer about half an inch deep and kept the borders about 2 inches wide. Poured in the jello and let it fully set. The marble cake did compromise the clarity of the jello pool slightly, but at the same time swirl pool floor was also a neat effect.

I did a second layer of icing on the outside (of Course purple) and added the white edge border and vertical lines to the surrounding. I love playing with fondant. So I made the best out of the mini cupcakes top with buttercream icing then turned them into fondant people floating on inner tubes.

It was quite as I visualized it in my head, but the kids loved it, so I was happy. I think maybe a person on the water or a ladder and diving board would have defined it as a pool a little better.

Coolest Swimming Pool Cake For Mamaw Made By Grandkids