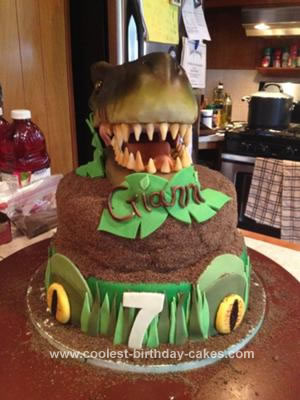 My nephew has been obsessed with dinosaurs his entire life so it was no surprise when he requested a dinosaur cake for his upcoming birthday. He was very specific, insisting his cake have a T-rex (of course, with this being his all time FAVORITE), a brontosaurus, a pterodactyl, and a stegasaurus. I wasn’t looking forward to sculpting FOUR separate fondant dinosaurs as it was sure to take hours of detail work so I did some quick brainstorming and came up with a cool idea.

I had recently come across a cool fossil cake perusing cake blogs (yeah, I wear my cake nerd hat proudly) with fondant fossils covered in “dirt” to be unearthed by the birthday boy! I know, right? SO EXCITING! I knew my nephew would LOVE being a little archaeologist so I wanted to incorporate that somehow and it turned out to be the PERFECT time-saving solution for getting me out of sculpting four separate dinosaurs.

He’s always loved the T-rex so I definitely wanted a scary, realistic monstrous beast to be my focus, the idea being that he’d eaten the other dinosaurs. I opted for sculpting his head out of rice crispies treats, sculpting the top of his head and the bottom of his jaw separately so that I could leave his mouth open for a scarier effect. I covered it with fondant and airbrushed it so it’d look more realistic. His teeth are held in with tooth picks and his head is supported with thick wooden dowels holding up a foam core board I had wedged up into the roof of his mouth so all of the supports are hidden.

The top is cool but the middle tier is the fun part! I googled the layout of the bones for my fossils for accuracy (because I had absolutely NO intention on being called out and corrected by a seven year old in front of a party full of people). They were really simple, I just cut out the skulls and rolled out some fondant pieces for the bones; they are attached with just water to the side of the cake, although I did allow ample time for them to dry and affix before covering them with the graham/Oreo mixture I pulverized to make my dirt.

The bottom tier is supposed to look like another T-rex peeking through the grass for his next victim! 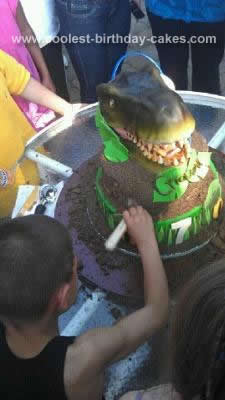 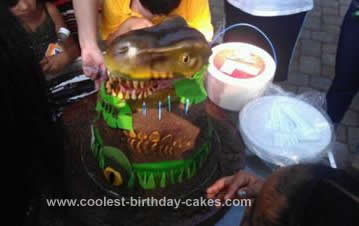 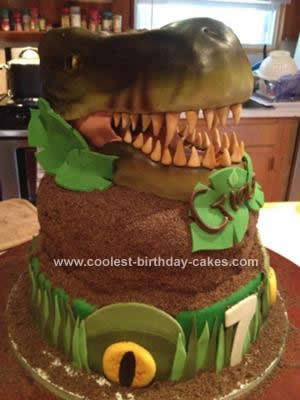