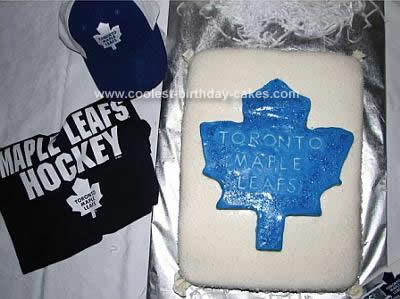 I made this Toronto Maple Leafs Cake for family members moving to Toronto. It was the farewell party cake. It’s 2 11 x 15 cake with buttercream icing in the middle. I used plastic dowel rods so the cake would not move to much while being transported to the location.

I covered the cake with a thin layer of buttercream icing. I made my own fondant and covered the cake. This was my first time using fondant on a large cake. It turned out quite well, I was very happy with it. The Toronto maple Leaf emblem in rice krispie squares covered in fondant icing. I added buttercream icing first so the fondant would stick better. The original cake I made for the Maple leaf ended up cracking down the middle of the cake so instead of making another cake I made rice krispie squares and craved out the Maple Leaf.