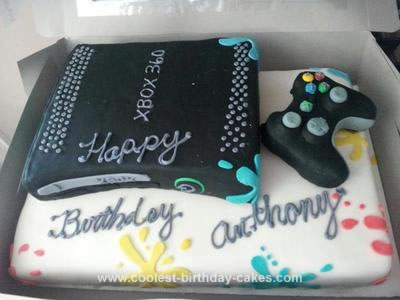 My Xbox birthday cake was for my nephew who is totally obsessed with his Xbox, so I thought it was the perfect cake for him. The bottom tier was a white cake with chocolate pudding and bananas, the controller was sculpted out of rice crispy treats and so was the Xbox.

I used piping to make the air holes on the side of the cake and used the back of a paint brush with some powdered sugar to make them flat. I covered the bottom tier in white fondant and made paint splatters out of different colored fondant to make it look fun.

The controller was covered in black fondant for the buttons were M&M’s. The 2 control sticks were movable. I used small pieces of wood dowels and covered them in fondant. It was so realistic looking.

The Xbox itself came out great, when it was time to cut the cake everyone went crazy. They could not believe it was edible. My nephew thought I used a real controller, he wanted to know if he could turn it on (He’s only 7).

Overall it was awesome and made me feel great!