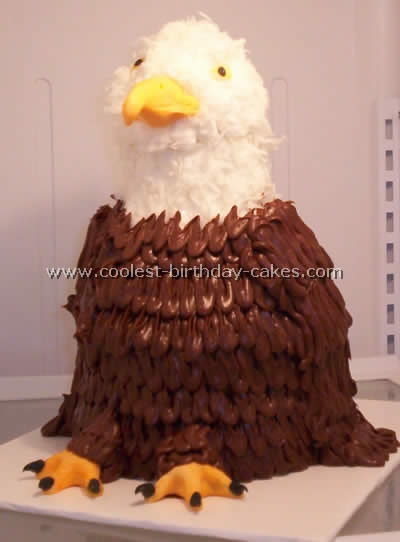 My daughter, who turned eight, absolutely loves eagles! For her birthday she was set on an eagle cake! This site didn’t have any ideas for eagles so I created this cake.

I baked two cakes in 2-qt Pyrex bowls and stacked them on top of each other for the body. I baked one cake mix at a time in the bowl. I did some trimming of the cake to even out the shape. I secured the body with bamboo skewers. For the neck and head I stacked two large muffins on top of each other (a large muffin pan would probably work if you wanted it to be made of cake) and carved the shape of an eagle’s head. Once again I secured it with several skewers for stability.

I then made the feet and beak out of fondant and allowed them to dry for about ten minutes. When I made the beak I kneaded the skewers into the back so it was designed like an electrical plug. (Then I could stick the beak on when the head was constructed.) I used a tip 104 and homemade white icing to cover the head in icing pressing coconut onto it immediately. This is important to get the coconut to stick. I then used a tip 104 in a ruffle pattern with store-bought chocolate icing to create the feathers. I used the same technique to create the wings. I then attached the beak put on the feet and pressed eyes on made of fondant (careful they don’t like to stick to coconut) and added finishing touches. My daughter and all of the guests loved the cake!