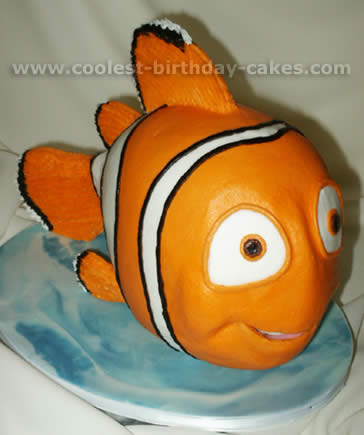 The water is marbled fondant on 1/2″ foam core board.

The body of the fish is made with Wilton’s egg pan with an oval in between. A support board in the center is a must, with bamboo stakes hammered down through the cake and into the baseboard to keep it from rolling off.

Fins, added last, are 1/4″ foam core board covered with icing piped on with a star tube. 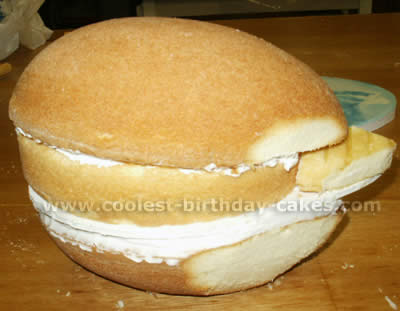 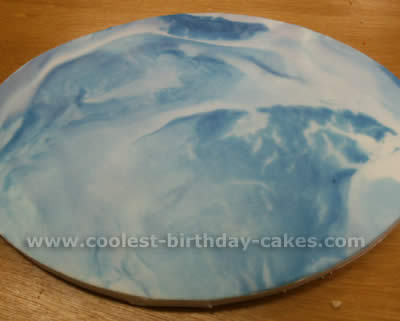 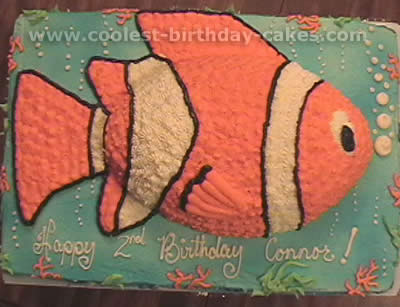 I not only submit pictures of my creations and Finding Nemo cakes to this site, but I love to look for ideas as well. This cake idea came right from this website, I just embellished the sheet cake that Nemo is on. I loved the idea of using the football pan to get the shape of the body. I also love the idea of getting such a great look, just by using the star tip! It’s so easy! 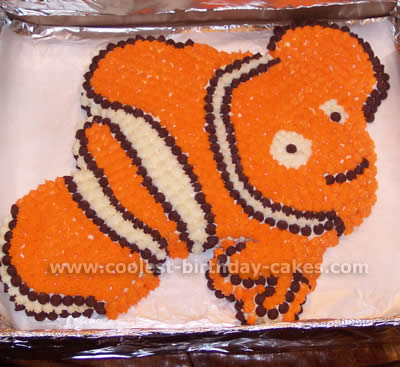 There was NO doubt that for my son’s 2nd birthday party we would invite his friend, Nemo! So, I took the party invitation and blew up the finding Nemo picture. I have to cut it out and tape it together to get it big enough to cover a sheet cake and then I cut the edges out. Who needs those shaped cake pans, right?

The fins were two smaller cakes cut to shape and just placed beside the body. Once you get all the icing on the cake, no one ever knows the difference! I always use a pound cake and cream cheese frosting when I make my homemade cakes. It takes longer because you have to keep the frosting firm by placing it in the refrigerator once it starts to soften up on you; but it’s worth it and very tasty!

I used the star cake tip to fill in everywhere with orange and white icing. All the outlines were made using milk chocolate chips. They were very good! I hope this helps you with your Finding Nemo cakes! 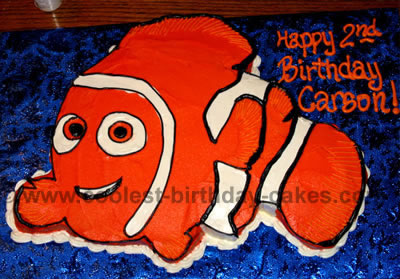 I started with a rectangular cake. I printed the image off on the computer, and placed it on to the cake. I carved around the paper to shape the cake. Then, I iced the Finding Nemo cake using butter cream icing. 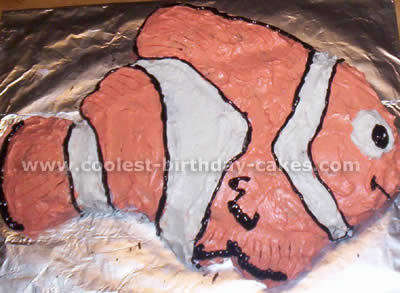 For my daughter’s first Birthday, I wanted to make her a cut-out cake of my own design somewhat, but of something she would recognize, and like. We recently set up a salt-water fish aquarium, and her fish? A clown. She calls him “MO” (her best rendition of “NEMO” we presume). So what better than a “MO” cake?

I baked a 13×9 inch cake, and basically used a NEMO stuffed animal toy that we bought her for her birthday as my guide. I cut out the body of the fish first, and then used the “scraps” to form the fins and tail.

There was NO WASTE; I managed to use all the cake pieces I had trimmed off. I then stuck the fins on with frosting, which by the way was homemade, and I had previously divided into two parts, white, and food colored orange. Once formed, I started with the head, and frosted the orange, then switched to white and so on. The black outlines were done with cake decorating gel, THREE TUBES! I used a toothpick to detail the fins and tail. The rest is his-MO-ry! :) 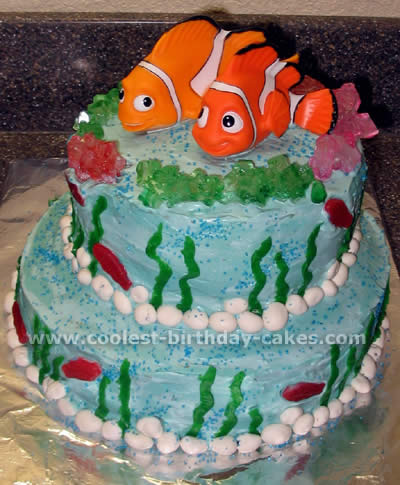 For my daughter’s second birthday, we had a Finding Nemo party, and I wanted her to have a special cake! I got the idea for this cake from another cake on this website. So many great tips on here! And through making this cake, I learned a few of my own.

I used two cake mixes to complete this cake. I used two 9-inch cake pans (2 for each box of cake mix) I then froze all of the cakes. I put the baked cakes on plates and froze them – my advice would be to put them on wax paper because it was very difficult getting the Finding Nemo cakes off of the plates without the top layer lifting off.

Once they were frozen, I used a bowl we had (about a 6-inch diameter) to cut two of the cakes into smaller circles (if you have smaller cake pans that would be a better way to go; I only had the 9-inch ones). I frosted the whole cake with regular store bought frosting, tinted with food coloring to be aqua.

To smooth out the frosting, I dipped my spatula into milk and then smoothed it all out. I used green frosting and a leaf tip (from Cake Mate) to make the seaweed, yogurt raisins to look like sand, and Swedish fish around the sides. On the top I used the Marlin and Nemo figurines from a bath toy set we have (of course I washed them off first :).

Also on the very top was rock candy used as coral. I’ve never made a cake like this before, and was completely inspired by this site. It is a cake that looked really fun and fancy, but wasn’t tricky to make at all! We got lots of compliments and now I’m looking forward to making more birthday cakes! 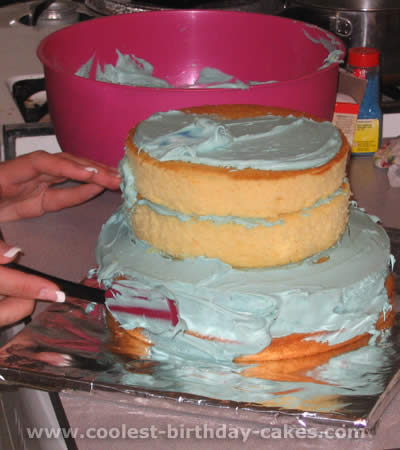 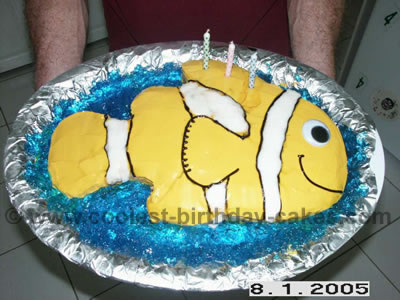 We decided to try and make a cool Finding Nemo cake for our
son’s 3rd Birthday.  While trying to find decent Finding Nemo cakes on the internet, I stumbled on this site and found a couple of nice ones.  I also had a good look at some of the other themed and creative cakes – and got inspired…, , My wife made a fantastic cake on the morning of the birthday and we chilled it well.  The day before, I had got one of my boy’s Nemo books and found a decent drawing of Nemo.  I then used our home all-in-one scanner/copier to enlarge this drawing until I came up with a size that fitted the prospective cake tin!  I printed the drawing in three sheets, stuck them together and the cut it out., , After the cake was done, I cut out the shape of Nemo around the printout.  We then used a Cream Cheese based frosting of Orange (or close enough) to cover the cake top and sides after it had been placed into a foil-covered tray.  After this, I did the black outline with a cake decorating gel and we filled in with the white icing.  I got a toy ‘eye’ from a craft shop and put this on the front., , We LOVED the idea from other Finding Nemo cakes of having the fish ‘swim’ in blue Jell-O, so we made some up and put this around Nemo.  The end result, considering that neither my wife or I have ever made a cake like this before EVER, was fantastic and our boy LOVED it.  His eyes bugged out when his Finding Nemo came in while singing Happy Birthday – it made it worthwhile. I hope this might inspire someone else to come up with new Finding Nemo cakes, just as other cakes on this site inspired us – thanks everyone! 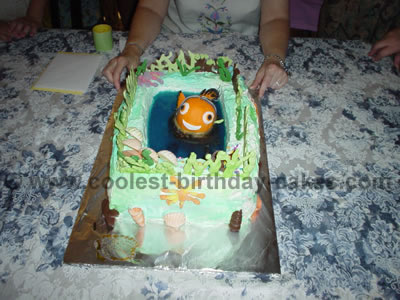 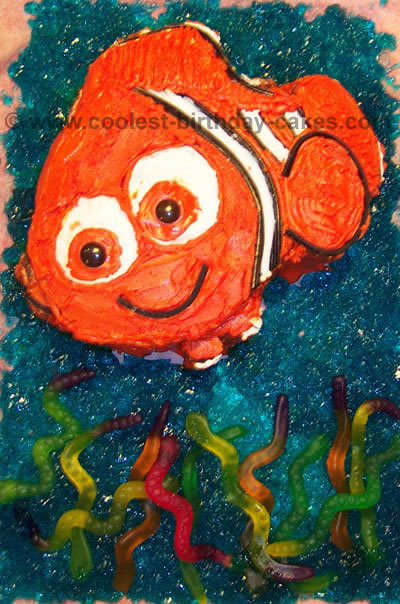 For this Finding Nemo cake I used a basic yellow cake recipe, prepared in a rectangular tin. I scanned a Nemo coloring book picture and scaled it to fit the cake, printed it out, and used it as a pattern to cut out the cake.

It was frosted with orange frosting; I used a white tube icing for the highlights. The black stripes were made with black lickerish straps and the eyes were brown M&Ms.

I put the Nemo cake on a tray, covered with wax paper. It sat in lemon Jell-O (colored with blue food coloring) and had gummy snakes to represent Nemo’s sea anemone home. 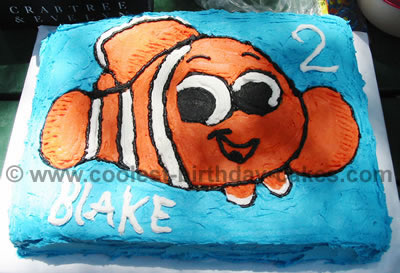 As I am in Australia , there is no point giving measurements for the Finding Nemo cake or icing as we use a different metric system to that used in the US.

But all I did was make a 30cm x 40cm vanilla butter cake and used white, black, orange and blue butter icing. I blew up the appropriate picture of Nemo on the photocopier, cut it out and placed on the cake, which was frozen to make it less crumbly. I then traced the outside with a small knife, then removed the photocopy and filled in the eyes, mouth, stripes etc.

Using a piping bag I piped the black outline first then filled it all in. I needed three piping bags – one each for black, orange and white. Once that was all done I filled in the remainder of the cake with blue and wrote my son’s name and number 2. The Finding Nemo cake was quite simple but time consuming.

The obvious error (thankfully not picked up by the littlies) was me forgetting to pipe on Nemo’s lucky fin at the end. 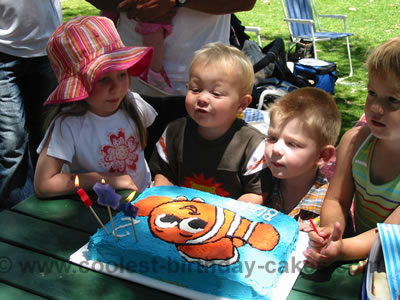 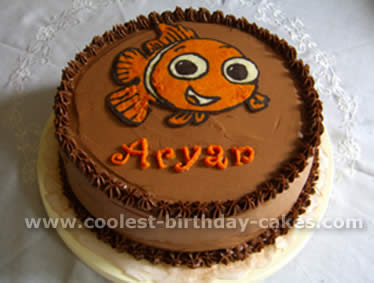 It was my second baby’s first birthday and I had no idea what to make. I searched the Net and found some inspiration and ideas from Finding Nemo cakes on this site. I decided to make a triple chocolate Nemo cake.

First I baked a basic chocolate sponge cake, and divided into three using sewing thread. Then each layer I added melted cooking chocolate and for the cream I used melted dark chocolate mixed with whipping cream and pour all over the cake.

For the Nemo, I got a finding Nemo picture and printed it out on paper. I traced it with bread paper, first I traced the outline of the Nemo with melted dark cooking chocolate then I prepared melted white chocolate for the eyes and the body lines and finally the white I added few drops of yellow and red food coloring. After filling the fish, I let it cool first before I transferred it to the cake. 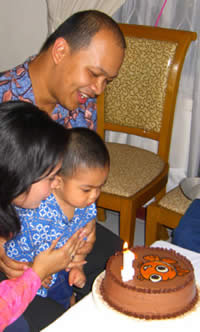 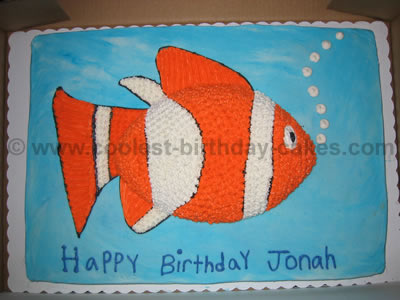 For this Finding Nemo cake, I used a Football / Finding Nemo Cake Pan and then outlined the rest of the tail and the head on the cake board.