This is the very first creative cake I have ever made. It was for my son’s 15 birthday. The picture of the guitar birthday cake is the exact guitar my son has. The cake is made of six chocolate cake box mixes, prepared according to the directions on the box. My husband drew the template out on three sheets of paper and I carved out the cake using the template as a guideline.

I used goldfish crackers for the tuners and mixed food color and icing for all of the details. 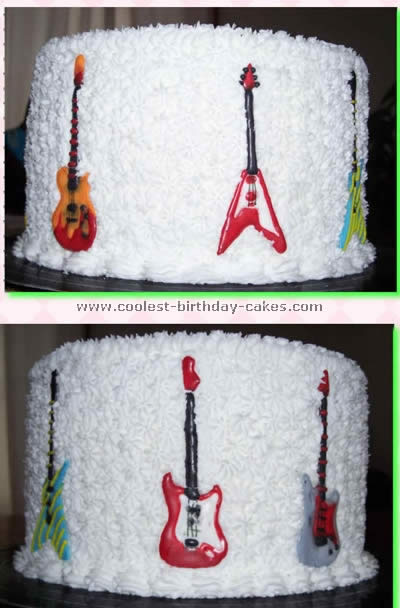 This is a three layer (top and bottom layers are chocolate and the middle one was white), 8″ round guitar birthday cake I made for a friend’s nephew. The different color guitars on the side are made of color flow icing and so are the words. The white icing is buttercream. For a finishing off I used an old record on a cake board to present it on.

I made this guitar birthday cake for a teenage boy’s birthday. I started with a cardboard cutout of the guitar to use to cut out the shape from 9X13 cakes. Then I iced the different sections to ‘glue’ the whole guitar together. I decorated it with buttercream icing and used fondant for the flames.

I made this guitar birthday cake for a friend who was going to California to make it big. It was made with large sheet pans cut and assembled using a template I drew myself. I then frosted it with buttercream icing and the side I poured chocolate ganache. I did some fondant detailing on the top but the strings were piped using a #1 tip. 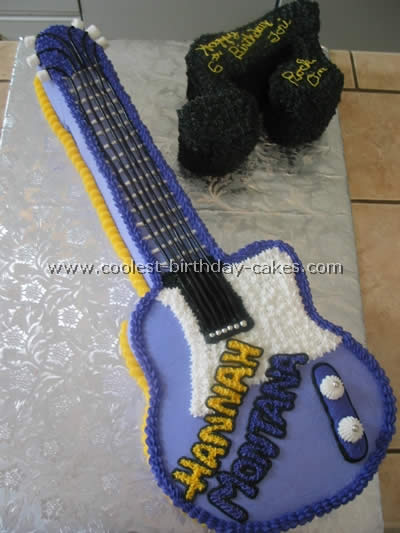 I printed out a copy of an electric guitar and taped it to a sheet of wax paper. After baking the cake I placed the guitar that I cut out onto the cake and cut the cake in that shape. I put purple icing on it and decorated it saying “Hannah Montana”. I put six black licorice strings on it for the strings and put mini marshmallows at the end of each string for the tuners.

Then I decorated the guitar birthday cake with edible beads and I added the music note so it would feed more people. 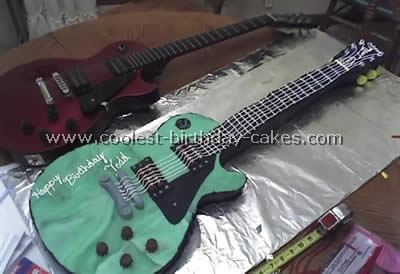 I got this idea for my guitar birthday cake for my boyfriend’s birthday because he is a guitar player and a music lover. He works in the Music industry here in Nashville and I thought…what a cool idea. So I thought I’d give it a try. I’m really pleased with the results, not to mention how impressed everyone was when we showed up with the cake.

I started out by tracing the Les Paul guitar; I did this by taping lots of pieces of paper together. Then I figured out which size cake pans it would take to make it. I used a 12 x 15 inch pan for the base of the guitar; this pan had to be used twice (two cake mixes for each pan).

Then I used a regular 9 x 12.5 sheet pan for the neck of the guitar. After cooling all the cakes I cut out my template that I made from tracing the guitar. I made sure I had the right measurements by measuring the actual guitar. Then I laid my template onto each of the cakes and cut out my design.

I decided to try my luck at fondant and I kneaded the food coloring in (green for the face of the guitar). After getting the color I wanted I rolled it out, used the guitar template again and cut out the face. I did the same with the black for the other part of the face. Then I colored the fondant to grey and rolled out the pieces for where the strings go on a guitar. I don’t know what these are called.

I used Rollo’s for the volume knobs on the face. Next, I used fondant again for the screws. I used black icing for the neck of the guitar. I used softened star burst for the tuning knobs (at the top of the neck). Next I used fondant for the things used to tighten the strings that tune it. And last but not least I used a steady hand and icing to make the strings.

This guitar birthday cake took me nine hours to make but it was well worth the effort I put into it. 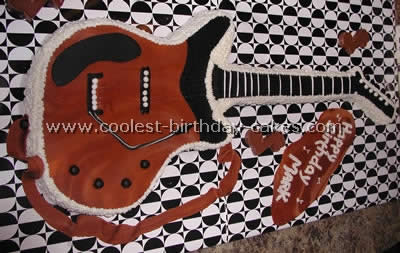 I made this full size guitar birthday cake for a friend who is a singer in a well known band in our area. I cut the head of the guitar from a 16″ square pan so that it was all one piece. The fret bar is constructed from an 8″ square pan cut in thirds then placed end to end for the length.

I used fondant on the top of the cake for the detailing, fishing line for the strings and finished the sides with royal icing. One of my favorites I’ve made so far!

Take a look at more of the coolest Guitar birthday cakes…